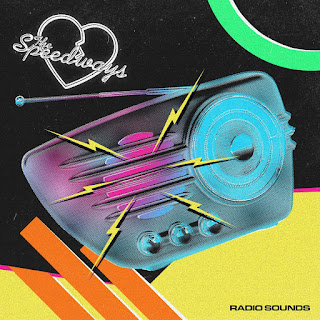 Once a moniker for a solo artist, The Speedways have now turned into a 4 piece rock'n'roll band. The quartet has very recently released its brilliant sophomore full length, the aptly titled "Radio Sounds". Matt Julian, good friend of this blog and all around nice guy, tells us all the changes that happened since the release of the debut LP "Just Another Regular Summer".

Read the very interesting answers Matt so kindly provided to our questions and what sets the Speedways apart from any other power pop combo: melancholy. Just one listen to the amazing "This Is About A Girl Who Loves The Sun" and you'll know what we are talking about.

1) For the viewers of this blog who would not know you, What would you tell about the 2020 version of The Speedways to introduce yourself? At the time of the first album, "Just Another Regular Summer", it was mostly Matt Julian alone behind the moniker "The Speedways", it seems that there is a actual band right now. Can you introduce your partners in crime and tell what instrument they play. How did the four of you come together?

The Speedways was a solo thing in the beginning as you say, but for the last 2 years it's been a fully active band. Mauro Venegas is on lead guitar, Adrian Alfonso on bass guitar and Kris Hood on drums. All good friends that I'd made on the London music scene over the years. Collectively they've played in multiple bands, ran Club nights, produced fanzines, designed band artwork and they all DJ too.. A multi-talented bunch! We all compliment each other well I reckon. It came together pretty easily but I got lucky as hell too no doubt about that! We like the same music, we like the same bands, we like the same clothes.

To introduce ourselves, I'd say we're a guitar based hit-machine. We fit into the Power-Pop category for sure, but I think we have a melancholy side which gives us our own little style. Catchy tunes, up-tempo stuff + a few tearjerkers along the way for good measure.

2) And now about the big disappointment of this new record: gone is Diana Dors, replaced by a vulgar radio! ha ha. Why but why? The only thing left is a tiny tiny picture of Marilyn...hardly a consolation prize. We gonna need a serious explanation about that! 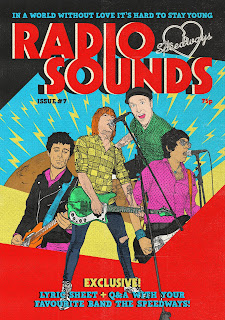 haha, well I wanted to change the aesthetic a bit for the second album. We didn't wanna just repeat what we had done before with the 'iconic blonde on the telephone' thing. Josh Clark did the artwork once again, but this time I only sent him a couple of rough ideas and said "make it as bright and as colorful as possible!" We definitely went for an early 80's kinda vibe. For the lyric inlay I had the idea that it could look like one of those old 'Look-In' magazines from the 70's/80's. Josh also used the Weird Tales Of The Ramones comic book as an influence too. I love how it turned out. It's a nice touch I think. Perhaps Diana Dors or Brigitte Bardot will return for the next single cover?!

3) About the new full length record "Radio Sounds",  what can you tell about the recording process? Was it different now that you are an actual four piece?

Yeah it was different in some ways. When you play all the instruments and sing harmony vocals over your own lead vocal (as I did on 'Regular Summer') it sounds cool and everything but it's definitely more rewarding as a writer when other people get hold of your songs  add their own style and flavor, as well as contribute to ideas and arrangements etc.. I think that definitely comes across on 'Radio Sounds'

The recording was done in stages. We had to record the drums separately at a different location, so Ben from the band Los Pepes brought along some mobile recording gear and me and Kris recorded drums together with him at a rehearsal studio. I played a guide guitar through his headphone mix and we both kinda cued each other when the chorus kicked in or whatever. Kris did an amazing job. We got all the songs down in just 2 sessions.

The guitars, keyboards and vocals were recorded with Jez Leather who's a former band mate of Mauro's.We recorded our cover of 'They Don't Know' with him which turned out really well so we were keen to have him involved on the album too. He was the perfect choice because he got involved a lot in the sounds & came up with some great ideas. The guitars were done very basic -  either a Telecaster, a Les Paul or a Strat straight into a Fender Twin Reverb, or occasionally a Marshall combo. The vocals were recorded in the bathroom Joe Meek style. We were all really on the ball with everything - lots of first takes & cool little last minute ideas.

A big link between the 2 albums are the sound clips and effects. I compiled a mix of radio ads and snippets of tunes (Telstar and I Wonder Who's Kissing Her Now) and I asked Tommy Unit from Real Punk Radio in the States if he'd record an Alan Freed style intro for me! ..where he says "stay tuned to Radio Sounds..don't touch that dial!" Jez edited it all down and it's a great way to start the record.
I wanted a female voice clip on 'Girl Who Loves The Sun' & for some reason a radio interview with Marilyn popped into my head where she says "if anything I'm generally miserable" - the clip fit exactly in the gap where I wanted it.. It wasn't trimmed at all, it just fit like a glove. The plane leaving at the end of the final song kinda speaks for itself. We wanted it to feel like a real album with a good flow and narrative and I think we did that. 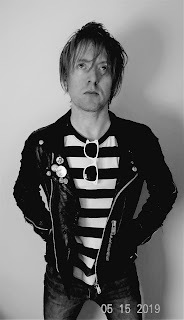 4) Four labels to release this new album. It seems that the Speedways are the hottest thing of the moment and everybody wanted a piece of the action. How was this venture of 4 labels put together? And was one label not enough?

Well, while it's true that we're pretty hot right now! it's actually only 3 labels really because Snap!! and Hurrah Musica work as a team together. It made for a lot of e.mails flying back and forth. Communication was tough at times, especially during these insane pandemic days, but it worked out really well in the end. Snap/Hurrah have been releasing our records for a little while now and they're great to work with, Beluga had been in touch about doing something with us too and also Daniel from Alien Snatch contacted me to say how much him and his little lad loved 'Just Another Regular Summer' and did I wanna release the next album on his label! - that was really cool. So, we went for a multi-label release - which does seem to be a trend these days to be fair.

A few people have reminded me of that over the last couple of years! I meant it when I said it! I only took it down from the bandcamp page a few weeks ago actually.....

6) What are your favorite topics to write about or the topics that come "easily" when you write a new song?

I tend to write about regret, love and disappointment ..but in an uplifting way! Lyrically 'Just Another Regular Summer' was a concept based on a real time in my life. It was a scrapbook of songs dedicated to the same girl. 'Radio Sounds' is a continuation of that but also drawing a line under it sadly. All my lyrics are honest. They're based on real memories and real conversations. I wouldn't be able to get on stage and sing words that didn't mean something to me.

Love songs are universal, timeless & span genres so even though my songs are specific to my own life I know they translate to other people too. 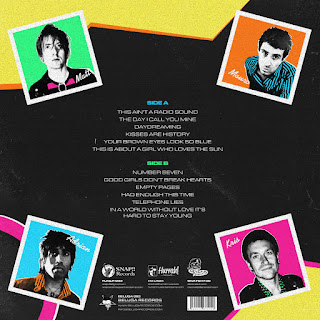 7) If there is one word that comes to mind to describe this new record, it's the word "radio-phonic", like the aim is really to be played on the radios all around the world. Do you agree with this? Are you proud of it or do you consider there is way more than that?

Yeah of course, I mean 'This Ain't A Radio Sound' isn't really about getting your songs played on the radio, it's just a metaphor for feeling like a failure. The song's about still being in a band despite never "making it". The "celebrating birthdays" line is about routine and doing the same thing year after year. We all keep playing on because we love it and what else are you gonna do? So calling the album 'Radio Sounds' is a double bluff because maybe we all still are chasing hit records on the quiet.

What was the question again? Oh yeah, so ironically we do get a lot of radio play - the legendary Rodney Bingenheimer has played 9 or 10 different Speedways songs on his shows over the last couple of years, Radio3 in Spain regularly spin the Speedways as does the great Todd O Phonic over in New Jersey + loads of other stations around the world. I'm really proud that so many DJ's and stations have supported the band.

8) Do you have a new video on youtube  featuring a track from the newly released LP??

We have a few DIY ones that I cobbled together during lockdown, but here's a proper one for 'Kisses Are History'

9) Are there any gigs of the Speedways planned for the rest of 2020?

Technically yeah, but with things as they are (the global pandemic and the general collapse of humanity etc..) it's tough to know what will definitely happen. We've only had to cancel 4 shows because of Lockdown, which is relatively few in comparison to some bands, but they were all really good ones and it's hard to take.We had a Festival date in Portugal that had to be pulled + our own album release show, a gig at the 100 Club with Baby Shakes and the Some Weird Sin Power Pop Weekender pt3. This was meant to be our year as the Zombies might have said...but, onwards and upwards, we have a slot at the Fuengirola Pop Festival on October 3rd + a few things penciled in for November/December. We're cautiously optimistic!

I've always been true to you.

SUPPORT THIS AMAZING POP BAND AND PURCHASE THE GOODIES HERE: