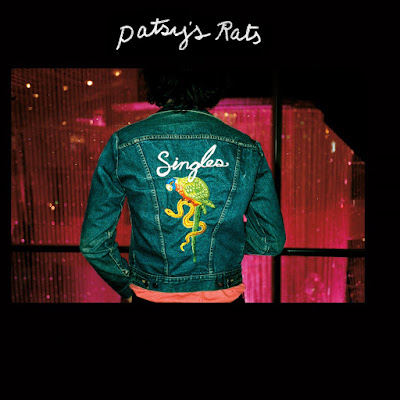 Patsy's Rats, the charming duo formed by Patsy Gelb (PG) and Christian Blunda (CB) have already released a slew of brilliant 45's and E.P's and a cassette via Burger Records. Recently BACHELOR RECORDS from Salzburg, Austria had the marvelous idea to bring all this gems together and release the aptly titled "Singles" album. Time for this blog to talk to the duo after their Euro tour.

1) For the viewers of this blog who don't know you, What would you tell about Patsy's Rats to introduce yourselves?

PG: Well I'm not good at this but here's a bio my Dad (i.e.Howe Gelb of Giant Sand) wrote about us. 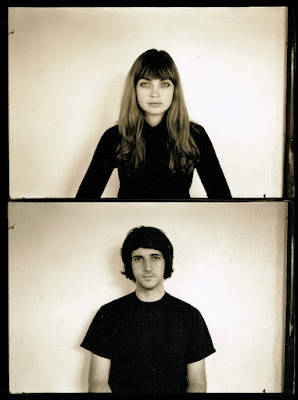 BIOs suck. They are a hazard. They try to sell you an idea and they don’t tell you nuthin’.
These guys began in Portland a little while ago. So what. They probably live in Highland Park now. Who doesn’t.

This band centers around Patsy and Christian. Patsy Gelb was named after Patsy Montana, just like Patsy Cline. Look her up. Her mom played bass in The Go-Gos and collaborated with Belinda Carlyle. Patsy’s real name is Indiosa, short for Independent, sorta. Her dad himself is an indie-rocker that she’s since collaborated with in his band Giant Sand. Big deal.

She was born in Hollywood in 1987 between Sunset and Hollywood Blvds. and then spent the next 4 years at the Rimrock Ranch near Joshua Tree living besides and learning to dance at Pappy and Harriet’s. Pappy and Harriet adored her. Well, that’s pretty cool. She began school in Tucson after that and stuck around till Portland happened, went through art school there and eventually ending up working on the Portlandia series. Also, it’s quite possible she is part bird. There is some evidence.

Christian Blunda escaped from Washington D.C. when the gettin’ was good. He eventually ran out of road in Portland. He and his cohorts begat the Mean Jeans and have been clobbering guitars over skulls in ever increasingly tour-dom because he needs more road. Either he chose his guitar snarl from 1978 or it chose him. It doesn’t matter. His pop hooks are relentlessly engaged in every clutch.

Together this pair and its pulverizing rhythm section make you sad next year won’t be 1979. Yes, they sing. So shut up about it. You turn up. They turn it up. The end.

Get fuckin’ happy. And get lost too.

1) (Continued) Is Patsy's Rats actually a real band or is this just you and Christian with some friends helping out?  Who is playing what instrument in the band? We want to hear it all from you! 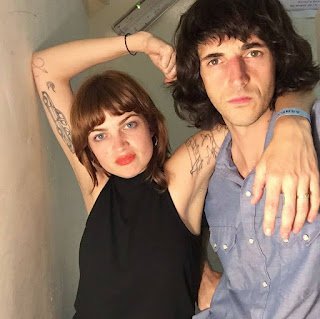 CB: I’ll answer your question with a question, what is a real band? I’m kidding. The band to this point has been Patsy and myself and whoever wanted to play. We both play guitar and sing. It’s enabled us to say we to every opportunity, and then find musicians to join us, which is great. It’s held us back in a way too, so we’re looking to have a solid LA band by the end of this year.

PG: Agreed, its both liberating and restrictive to always play with a new or different rhythm section. The cool thing is we can say we have band mates all over the country, prepped and ready for a tour/show in their neck of the woods! The not so cool is that we have repeatedly taught about 30 different people the same songs.

2) What can you tell about the recording process regarding the songs included on the full length record "Singles",? Was this a live in the studio recording or a track by track recording with lots of overdubs?

CB: it’s a collection of singles, so they were recorded at different times with different people. We track the band live and overdub Vocals and extras. In most cases the songs were new so we experimented with overdubs and figured it out as we went along. It’s a fun approach but you can take it too far easily.

CB: I don’t find myself playing many punk records at home these days (sorry!) but the punk I grew up on has informed everything I’ve done musically, and probably most of my life choices. I got into Minor Threat when I was 12, which has always made me love it RAW, though I’m not on board with most of their message. Loving Weezer at the same age got me into pop songwriting, and was a gateway into The Cars and power pop at large. Then of course the Ramones have been there since my older sister got the Mania! CD, inexorably influencing everything I've ever done.

PG: I feel the same about Weezer, they were my very first concert (not including my father's which I was attending and participating in at a very young age). Since I was a teenager I have admired Scout Niblett and I still do. The Cramps, maybe not apparent musically but they inspire me to keep on doing this crazy thing we do together.

4) Are you the main composer of all the tracks on this album or was this a full collaboration work between you and Christian?

CB: we write together. There are a few tracks that are all Patsy or all me, but we work on each other’s ideas together. 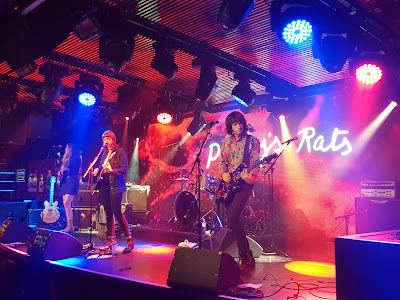 PG: Yeah its not necessarily always a clear process but it can be severely beneficial to pass song ideas or melodies off to each other and allow them to grow from the another perspective. Christian and his experience can really add to my simple or half baked ideas and I can bend his more advanced ideas out of shape a bit.


5) What are Patsy's Rats favorite topics to write about or the topics that come easily when you write a new song?

PG: I feel like half come from emotional hardship and darkness expressed within catchy pop melodies, possibly for self therapeutic purposes, and half are love songs.

6) Is there a new rock'n' roll scene in Los Angeles these days and are there any other bands you are feeling close to?

CB: we just moved to LA and have been mostly on tour since, so it’s all new territory for us. It’s exciting and there are tons of great bands. To name a few: Susan, CG Roxanne and The Nightmares, EASY, Small Wigs, Warm Drag, Cheap Tissue.

7) Do you have a video on youtube featuring a track from the latest release?
Rock n Roll friend:

8) What can concert goers expect at a gig of Patsy's Rats? Are you playing any famous cover songs?

9) What are the plans for the rest of 2018 as far as Patsy's Rats are concerned?

CB: we’re working on our first proper LP
PG: Hope to get some solid LA band mates! And play locally a lot more, there are so many places to play in SoCal.

CB: Check out my other band Mean Jeans, as featured on ratb0y69 in the past I believe! And thanks ratboy for the download of Phil seymours version of Little Town Flirt - I was looking all over for that.
PG: Thanks for reading and listening!