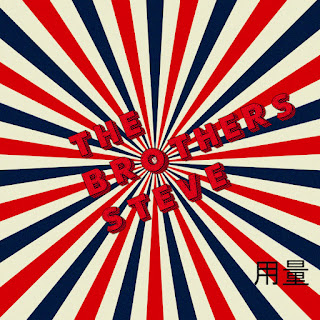 Last month, Big Stir Records released "DOSE", the sophomore album from THE BROTHERS STEVE. This new release is not only featuring the very addictive new single  “Next Aquarius”, but is also offering up 10 new songs which take the band's invigorating punk-pop sound in exciting new directions, folding in elements of psychedelia and glam rock.

This new material was written and recorded by singer-guitarists OS TYLER and JEFF WHALEN and is fueled by the chemistry of the live band: drummer COULTER (aka author S.W. Lauden) and bassist JEFF SOLOMON (Whalen's longtime band mates from the beloved LA pop-rock combo TSAR) and guitarist DYLAN CHAMPION.

So it was time for this blog to talk to OS TYLER about this new release. Here it goes! 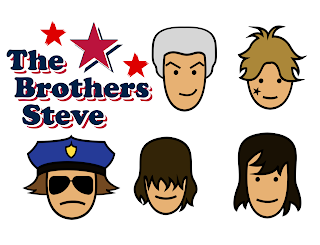 Hey Eric, the Brothers Steve is a Los Angeles based rock quintet. There’s Solomon (Jeff S.) on bass and Coulter on drums, those two make a solid rhythm section that really gets people moving. Not everyone knows that Solomon once rescued a baby rhinoceros, carrying it on his back across a rushing river in a torrential rainstorm. Coulter has been one of my favorite drummers for a long time, so it’s a real delight to get to play with him, but he’s an unstoppable force in Monopoly, so look out if he ever asks you if you want to play. Dylan, Jeff W and Os (that’s me) we three love to sing harmonies together and share lead vocals, or trade them back and forth. If you listen closely, you can tell when things are really working harmonically: you’ll see a sunset orange and blue color pattern, and perhaps a badger, dressed in a top hat and vest, dancing down a country lane. On our new record, Dose, it’s all the same members from our first record, #1.

2) About the "Dose"  full length album, what can you tell about the recording process? Was this a "live" in the studio recording or a track by track recording with lots of overdubs?

Our first record, #1, we had played all the songs live many times and we went in and recorded almost everything in a couple days. On this record, we got going right about the time the Pandemonium hit. So we never played the songs all together as a band. Due to the Global Phenomenon, we couldn’t all be in the studio together. So, the whole process was much more of a track-by-track scenario. But we’ve sung and played together so much, sometimes it really felt like we were all there at the same time, rocking and rolling, grooving and blending.

On the recording end, we're all digital. But we still try to inject some analog elements with a couple vintage tube amps and vintage microphones. And we’re still singing in analog! … But whether it’s analog or digital, I think the most important part to recording is capturing the feelings of the players. It’s like riding a horse over rolling green hills. If you're doing it right, anyone watching the horse ride feels a little exhilarated!

4) One can hear a much larger range of influences than on the first record going from psychedelia to glam rock. How would you describe the music The Brothers Steve are playing today?

Listen, everybody in the band is a total genius compared to me. And I don’t know if that’s a complement or not. But I know that Jeff and Jeff and Coulter and Dylan are all cultural vibraphones. They resonate with the sounds of the times. And they are deeply versed in music throughout the years and across the genres. So it’s wonderful to play with these talented, musically conscious players who act as a guiding light.

Me, I like to just let the parts happen as they may, let them all intertwine in whatever way, and if that makes the music Juicy Flumbulicious Poppadelia Delight, then that’s just fine. But yeah, I dunno, the music we’re making today should be a little bit of everything you love from every reference point in your consciousness, let’s call it: Pop Amalgamation or AmalgaPop. 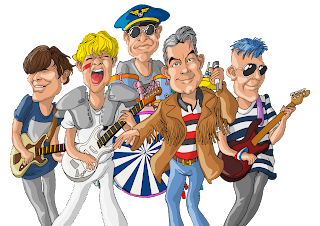 Jeff W. And I wrote all the songs on Dose together, and it’s really fantastic writing with Jeff, because he always has a number of underlying ideas or themes that he’s presenting and playing off one-another in subtle ways. Jeff has a plan and a vision and when we work together that provides a perfect focal point around which all the swirling ideas can flow and coalesce.

5) What is your favorite topic/topic that comes easily when you guys write the lyrics to a new song?

It’s a funny truth that often Jeff and I think that a song we’ve both written is about different things. If you ask us each what Wizard of Love is about, we’d give you completely different answers. Same is true for Griffith Observatory and maybe for Mrs. Rosenbaum, too. So, there are times we’re writing a song and we each actually think it’s about a different concept, and we just keeping writing, each of us in his own direction, and let the two ideas interplay in whatever way they do.

Anyway, I don’t know if Jeff thinks of this at all while we’re writing, but for me one of the big underlying topics is that all the stories are being told from the viewpoint of an emotive android with just a hint of precognition and a suspicion that it's telling stories sent back from the future.

Yeah! Check out our super-calliope-psychedelic video to Next Aquarius. Some truly amazing image transformation … You can see it here:

We also have a new official video for Electro-Love coming out soon!

7) What can concert goers expect at a The Brothers Steve gig? Are you playin' any famous cover songs during the concert?

Expect the unexpected! We hope our gigs are high energy and joyful. And that you leave hoping you can see more soon. … We typically don’t do famous covers at our shows, unless you want to count television commercial songs from long long ago … but you never know what might happen next.

Hard to say. I don’t think there are a lot of bands out there with 3 vocalists trading leads and singing harmonies these days. Bit of a stretch and a turn around the corner, but maybe the Avett Brothers? Do we have something in common with Haim? Is there anything about what we’re doing that Harry Styles would find familiar?

9) To what kind of music did you listen to as teenagers? What were your favorite bands as teenagers? Name 3 bands that you consider still have an influence on your own work today in The Brothers Steve.

I personally lived in a small town in Kentucky when I was a teenager. Most of the music I heard was whatever was on the one Top 40 radio station in town. But I was and still am a big fan of E.L.O. and a lot of what those guys did remains an influence today. Our drummer, Coulter, tends to mention Nilsson when it comes to influences on our writing, or my writing in particular. I’m happy to list Harry Nilsson as an ongoing influence. One more … let’s see, I’ll say the Cars, especially the very early stuff.

10) What are the plans for 2022 as far as The Brothers Steve are concerned?

We’re getting ready to dive into a new song-writing cycle. And from there, move along the creative cycle and record some new tunes. I’m anticipating a new record sometime in 2022. I hope you’ll anticipate that too!

Hm. Just a little reminder to glow and resonate and to be a divining rod, seeking out and pulling in and sharing back all the love and joy and inspiration that’s swirling around us. Would you do me a favor and remind me that next time you see me?

Oh, and if you get a chance, give a listen to our new record, Dose. You can listen here on Spotify: https://open.spotify.com/album/7vjGNi3ls5JScXw8aAywMG

Or direct from our amazing label, Big Stir Records: https://bigstirrecords.com/the-brothers-steve