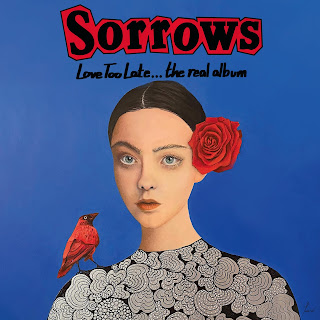 In the late '70s and early '80s, New York quartet SORROWS was a band on the rise with a thrilling stage presence and a unique sound: three lead singers, a twin-guitar attack, and immediately unforgettable, hook-propelled tunes. By '81 and the release of their debut album TEENAGE HEARTBREAK,  they were along with The Romantics and The Plimsouls at the top of the then called "Power-pop" scene.
The expectations for the sophomore album, Love Too Late, were very high but the end result was disappointing for fans and for the band itself. In fact, it's barely Sorrows on the original album at all, with the players and singers replaced in the studio by a bunch of hired guns, with only the songs surviving intact.
After four decades and some legal battles, original SORROWS members ARTHUR ALEXANDER (vocals, guitar), JOEY COLA (vocals, guitar) and RICKY STREET (vocals, bass), joined by drummer LUIS HERRERA re-recorded LOVE TOO LATE... the real album. It is, as Arthur says in the sleeve notes, “real Sorrows, playing real Sorrows music, as only Sorrows can”, and those who were there to hear these songs performed live in the band's heyday will attest that This Real Album now released on BIG STIR RECORDS is the real deal indeed.
1) For the sake of the argument, let's say that a very young viewer stumbles upon this blog for the first time and doesn't know who SORROWS are: what would you tell him about the band to introduce the various members, the history of the band and also your body of work? 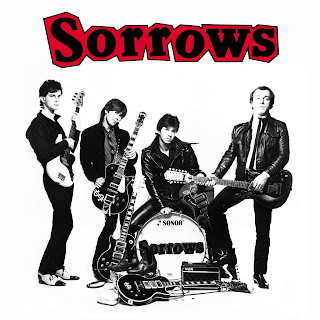 I started Sorrows around 1976, shortly after leaving The Poppees, one of the NYC bands on the then just starting punk/new wave scene in the city.  The Poppees were heavily slanted towards the Merseybeat sound of the early 60s, especially The Beatles, and were one of the early bands who laid the foundation for what was soon to become known as Power Pop.

Sorrows lineup consisted of Joey Cola on voc/gtr; Ricky Street on voc/bass; me on voc/gtr, and Jett Harris on drums (Jett also played with me in The Poppees.)  Early on we played all the hot spots in New York and often played up and down the east coast in Boston, Philadephia, Washington, DC and other cities, developing a solid following.

In 1979 we signed a record deal with one of the CBS Records associated labels and put out two albums.  The first one - “Teenage Heartbreak” – was very well received by the fans and critics alike, becoming stuff of legends.  Especially, since after its initial release CBS never again re-released any of our records.  The follow-up album, “Love Too Late”, was recorded in London and produced by Shel Talmy.  It was a total cluster fuck and a farce of a record.  Basically, a bunch of studio musicians we were replaced with, accompanying Joey’s vocals.

We as a band disowned it, fan picked up on the stench and the radio DJs wouldn’t touch it.  The record, as could be expected, was a total flop and disappeared without a trace.  And that was a good thing!

2)  About the newly re_recorded album, "Love too late",  what can you tell about the recording process? Was this a "live" in the studio recording or a track by track recording with lots of overdubs?

While re-releasing “Teenage Heartbreak” was relatively easy, just a matter of improving the mixes and overall sound, “Love Too Late” presented a whole different problem.  Even though we eventually reclaimed the rights to our songs and masters, when it came to this record there was really nothing to ‘re-release’. Talmy’s “production” was total garbage and “the band” was a bunch of studio hacks, not Sorrows. The only (and the right) thing to do was to record the album as it was intended.

By this time we were spread out between east and west coast so doing it “live” was not an option.  Also, by then Jett Harris had retired from playing altogether.  Luis Herrera stepped in and the first thing on the agenda was to replace the abominable sounding drums with ones that sounded like drums and being played by a real rock and roll drummer (though I would have settled for at least someone with a pulse!).  That done, we replaced all the fucking keyboards and synths the tracks were drowning in, with guitars, since we ARE a guitar band! Next came replacing the studio singers with our own vocals (what a concept!).  Only then came the overdubs as I intended them to be, which I never even got to do any of it after I walked out in the middle of the original sessions.  It took a lot of time and hard work, but it was worth it. 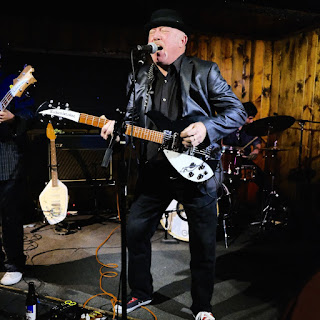 “Love Too Late… the real album” IS the album that Sorrows meant it to be.

3) As far as the recordings of this latest album are concerned, did you use the nowadays digital recording technology or do you still keep on working with analog machines in analog studios?

We didn’t have the luxury, or the budget, for going to commercial studios and I have a pretty  cool studio setup of my own.  It was all done in Pro Tools, although I did run many tracks through my 2-track Studer/Revox tape machine while recording.

Sounds like you mean “lyrics”?  Joey and Ricky are actually quite good when it comes to lyrics.  Me, well, I’m no Bob Dylan, so I typically end up sticking with the tried (trite? ) and true, you know, boy/girl/sex… though occasionally I do surprise myself with something that’s actually half way decent!

We all share common influences, from the early rockers, like Chuck Berry, Little Richard and Eddie Cochran, to the 60’s Brit bands; Beatles, Stones, Who, Kinks, etc… 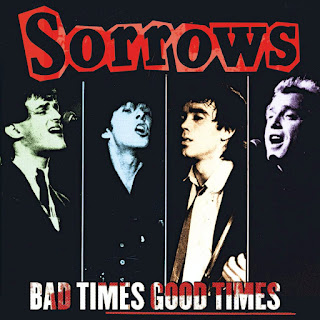 6) Now that your sophomore album finally received the deserved treatment, do you also consider, at least, a reissue of your debut album. If I'm not mistaking this album has never been released on CD?

Frankly, I can’t think of any, one exception being Pat Todd and The Rankoutsiders from LA.  A great rock and roll band that deserves way more recognition than they’ve gotten.

I don’t know if it was “easier”, but I think it was more fun.  At least for us, since we were fortunate to be a part of a real ‘scene’ that was happening in New York at the time, something that really hasn’t happened since.

I’ve been the main writer in the band, but I always encouraged the others to bring in their songs .  Both Joey and Ricky have contributed quite a few great ones to our repertoire. 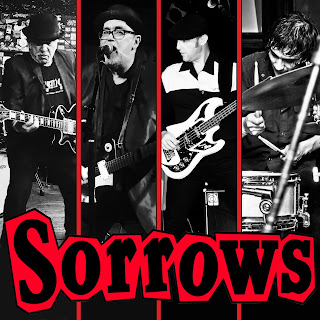 10) You guys are now Big Stir Records recording artists. Is this the label that suits SORROWS the best And if so, why?

Yes, we’re part of BSR family of artists and couldn’t be happier!  They are great people, work their asses off for their artists and are truly on a mission to not only promote Power Pop, but to also treat their artists like human beings, not just numbers on the accounting ledger. Quite a refreshing concept!...

The way things are right now, with Covid raging across the country and half the US population apparently having swallowed the ”stupid pill”, there is really no incentive to do much. Hopefully they all get a clue before they die and things will get back to normal.

I’d love for Sorrows to do some live shows, tour, especially Europe, Japan would be a blast!... but for the time being that doesn’t seem to be in the cards.  May be 2022 will bring some hope.