The Flamin' Groovies - One Night Stand 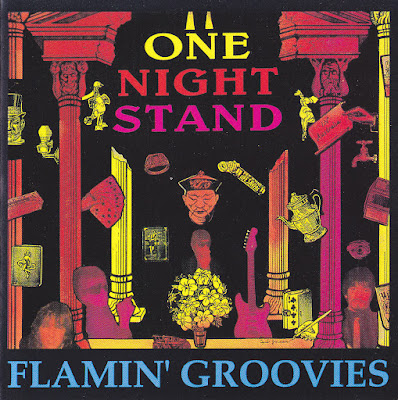 The Flamin' Groovies - One Night Stand
In WAV - Scans are included

This is the Groovies (with Cyril Jordan and George Alexander) Recorded in July 1986 at Glebe Studios Sidney, Australia, doing what bands do to kill time while on tour: go into a studio and cut ten killer tunes, including the Raiders' "Kicks," "Money," "Tallahassee Lassie," "Slow Down," the early Who obscurity "Call Me Lightning," as well as their own hits "Slow Death," "Shake Some Action," and "Teenage Head." They're certainly not breaking any new ground here with drummer Paul Zahl and guitarist Jack Johnson, but it's a terrific souvenir, with more great cover artwork from Cyril. 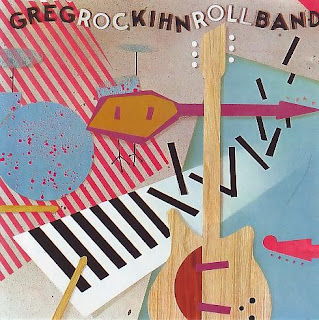 This is one of Greg Kihn's best, and most cohesive albums. It's an album that is plainly, simple rock and roll. It came out during the new wave craze. And people were itching for some simple rock and roll pop melodies again. Greg Kihn is best when he write love songs. His voice has a folky sound to it with a unique husky whisper. Every song on this album from Valerie to True Confessions, Have catchy hooks, and yet a feel of familarity.

Thanks to JPaul for this cool contribution!
Publié par ratboy69 à l'adresse 7:43 AM 11 commentaires 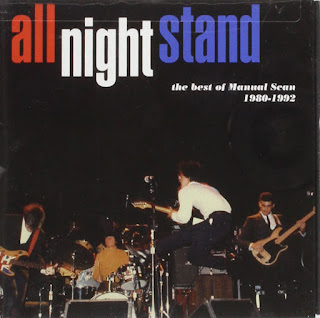 Manual Scan - All Night Stand
In Flac - Scans are included

Forming in San Diego during the late ’70s Manual Scan was at the forefront of the just emerging mod/garage revival. In that mode, they saw several releases on various labels over the next 12 years that included some great mod/garage/pop originals as well as a few superb remakes of ‘60s classics. This 21-track release compiles a large portion of their recorded output complete with 12-page booklet featuring their story, stunning photos and detailed notes on each track. A must for the mod-fan! 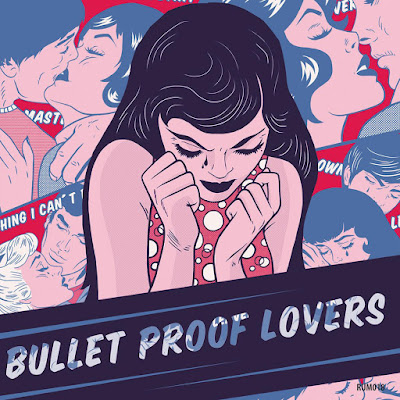 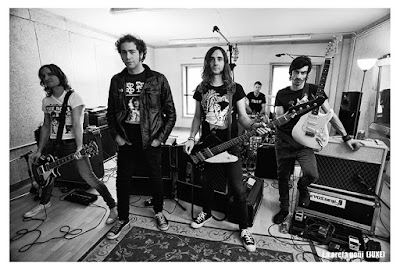 The CD is finally out now on RUMBAR Records!

Jonesy - Self Titled 7" out now on NO FRONT TEETH RECORDS! 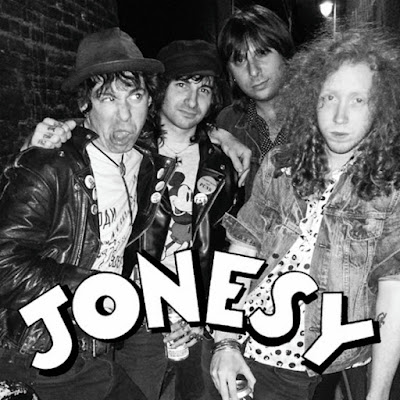 The Dictators once asked "Who will save rock'n'roll?". Well my friends, I'm pleased to say that the answer to that primordial question comes straight from the streets of Montreal, Québec: JONESY! 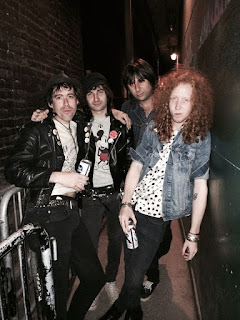 And JONESY is not only about attitude, these guys know how to write amazing ultra catchy tunes with ripping guitars that ooze with all the right musical influences. You name it, they have it: The Heartbreakers, The Waldos, The New York Dolls, The Dead boys.....

So stop sobbing; there is a future to rock'n'roll, after all, and its name is not Bruce Springsteen, its name is JONESY. 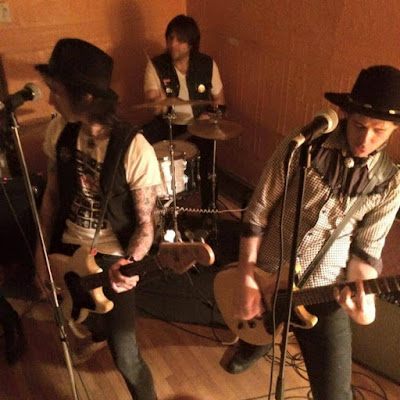 The Inmates - Meet The Beatles 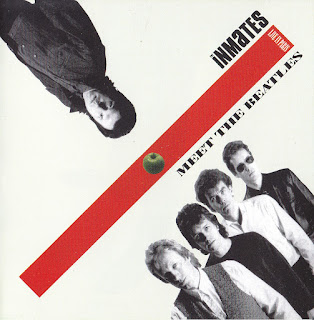 The Inmates - Meet The Beatles
In wav - Scans are included

In 1987, French newspaper Liberation invited British R&B stalwarts The Inmates to perform a concert in Paris to celebrate the 20th anniversary of the Sgt Pepper album. The Inmates delivered a legendary show made of pumped-up versions of Beatles classic rockers. The CD also features the encore: 3 classic Inmates songs, including their hit single "Dirty Water". Bill Hurley's voice is absolutely fantastic and the guy is surely one of England's greatest singers. The band plays like there's no tomorrow and gives us a truly great album!!

Radio Days - Back in the day 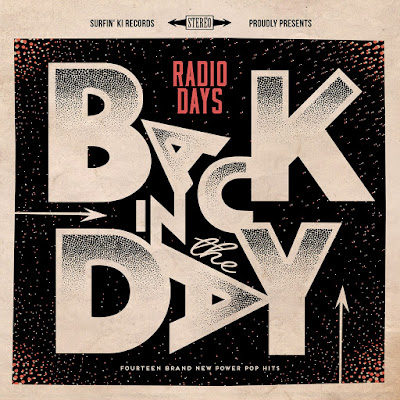 Radio Days has released 3 full length albums so far, plus one EP and 2 split 7” : one with The Rubinoos and another with The Paul Collins Beat. Their latest release, "Back in the day" is out since a couple of months and is definitely their best offering so far.

These guys really know how to write catchy melodies that will stick in your head for days. The trio displays the perfect combination between 60's melodies reminiscent of the Beatles or the Kinks and the energy of bands from the 70's like Elvis Costello, The  Knack or The Romantics. 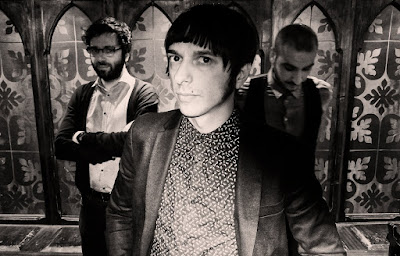 Here is a little chat yours truly had with Dario Persi:

1) What can you tell about Radio Days? How long are you guys together as a band. You used to be 4 of you but now it seems you are a trio. What happened to the fourth guy? Are you feeling more comfortable now as a trio?

Ciao! We started out as a band in 2003 but we really started playing gigs a lot around 2008 when we released our EP "Midnight Cemetery Rendezvous". Our previous guitar player, Omar, joined the band in 2008 and left in 2014. We were not feeling the same anymore about our music. Now he plays guitar for another Italian band. We had to stop for a while and learn to play as a power trio... But we love the way it sounds and it gave a new life to the band. We recorded our last album Back in the Day as a trio and live. Then we added some overdubs and we feel it's our best record.

2) To what kind of music did you listen to as a teenager and does it still influence your today work? What was your favorite band as a teenager? Name 3 bands that you consider still have a influence on your own work today. 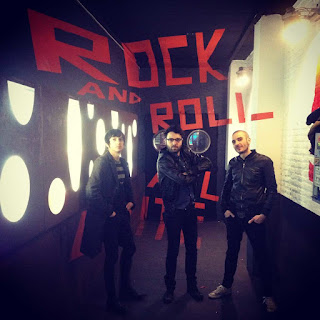 As a teenager, the first rock band that really blew me away was Green Day. I remember I was playing classical guitar since I was 8 or 9 but when I saw "basket case" video clip I thought: "I need to play electric guitar!". I loved old Green Day album and I still like them a lot. My favorite records are Dookie, Nimrod and Warning. They introduced me to Punk Rock and then I discovered rock'n'roll and power-pop. Discovering Punk Rock was amazing and I became a big fan of the Ramones and many Ramones core punk bands. I used to play with our drummer Paco in a punk band named Retarded. We toured all over Europe and the US from 1998 to 2008. We both have always been big Beatles fanatics... Mixing The Ramones and the Beatles it makes power-pop to us... That's what we like about music, playing with energy pop songs with great melodies and harmonies. And that's what we try to do with Radio Days. So if I have to mention 3 bands that still have a big influence on me since I was a teen I'd say Green Day, Ramones and the Beatles.


3) Are you the main composer in the band or is everybody involved in one way or another?

I write most of the music, I wrote all the music for our latest album and most of the old ones too. Sometimes our drummer Paco and our previous guitar player Omar wrote some stuff too. I don't like too much writing lyrics so the drummer Paco and the bass player Mattia write most of them. Usually I write a song with the acoustic guitar, with a verse and a chorus, then we rehearse all together and arrange it. We almost never jam songs during the rehearsals... We really focus on melody and harmony so we need to take our time and a good inspiration to write a good tune! 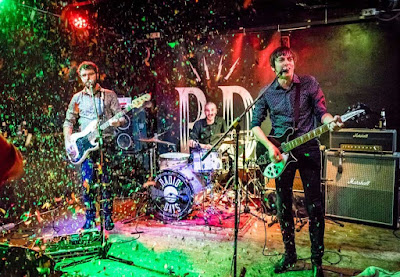 4) About the new record "Back in the day", can you explain the title? Is this some sort of nostalgia of a period of time where everything seemed better that it is in the nowadays world?

Yes, we have always been nostalgic about an old world, probably something that we even don't know well... It's a sort of nostalgia for a dream or a state of mind... It can also relate to the 50's or 60's, our favorite eras, when you could hear great songs on the radio and mainstream music was fabulous. But it's also a nostalgia of our teenager's days... As you can see we are really nostalgic. Also this album is the first that we recorded as 3 piece band , with the original members, after 13 years of existence. So it's a sort of rebirth for the band, back in the day again.

5) Radio Days can generally be seen as a Power pop band. Do you agree with this label or do consider there is more than that?

I agree with that, our idea of power-pop is to play a song with a beautiful melody, with vocal harmonies, played with energy with a fun attitude. If this is power-pop we are more than happy to be considered just like that!

6) Do you have a new video on YouTube featuring a track from the new LP??

We still don't have one... But we are planning to film a video for the song "Back in the Day" this winter. Here is a video featuring a track from the previous record.

7) What can concert goers expect at a Radio Days gig? Are you playing any famous cover songs?

They can expect a loud rock'n'roll show with great songs and a fun attitude! We play our songs from all our records and we have "La ruleta del Rock'n'roll", a rock'n'roll wheel that people can spin. We then play the cover songs! They are songs from our favorite artists (Beatles, Ramones, Kinks, Buddy Holly, Elvis, Undertones, David Bowie, Elvis Costello and many more...).

If we are the future of power-pop this means the genre it's not as its best... We are all around 35 years old haha But for sure we are not gonna stop. We are planning to release a new EP in early 2017 called "El Delfin y el Varano" for Clifford Records in Spain. It will feature a song taken from "Back in the Day", 2 unreleased tracks and a cover by the Nerves. We are also planning our first Japanese tour in 2017. We love what we do and we are gonna do it over and over again! Thanks for your time and see you soon! 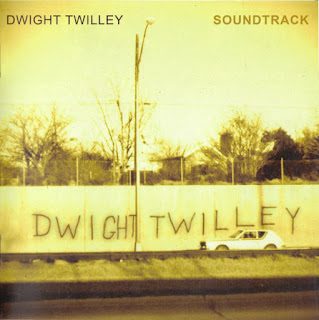 Dwight Twilley’s new studio album SOUNDTRACK is unique and perhaps the most powerful recording of Twilley’s career. Mr. Twilley signed on to write and produce the disc to accompany a film documentary about his life now in production. “Creating this album was a real challenge for me. Something I’ve never attempted. It’s completely autobiographical. For me these songs are like musical photographs of the people, places and events that tell my story.”
If you lost track of Dwight Twilley over the years since his mid-70s breakthroughs, Sincerely and Twilley Don't Mind, you're in luck, as his latest album is as richly enveloping and fully satisfying as you remember from thirty-five years ago. Those who kept up with the Oklahoman have been treated to new albums, live recordings and multiple volumes of unreleased material, but the pop mainstream long ago moved on from the magic he created with drummer/vocalist Phil Seymour and guitarist Bill Pitcock IV. With Seymour having passed away in 1993, and Pitcock having passed just as this new collection was being completed, this is likely to be the last album that retains the full measure of Twilley's `70s nostalgia.