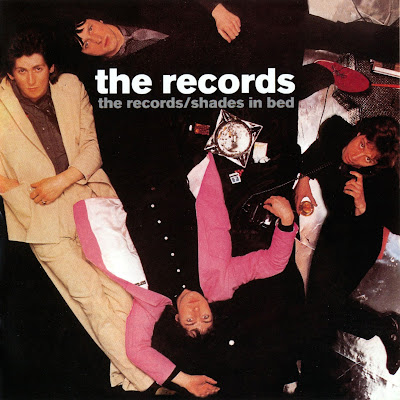 Shades In Bed must rate as one of the greatest power pop records ever made. The Records first album is re-released here with additional tracks including the 45 version of "Starry Eyes" which was on the original US version of the album. Will Birch and John Wicks first meet in 1977 when John joined the Kursaal Flyers. With the demise of Kursaal's the two of them formed the basis of The Records and were joined by Huw Gower and Phil Brown in 1978. "Starry Eyes" their debut single became a pop classic and after a couple more singles the band produced Shades In Bed. One of the all time classic power pop albums.

The MIGHTY GORDINIS - FUELED ON FUZZ 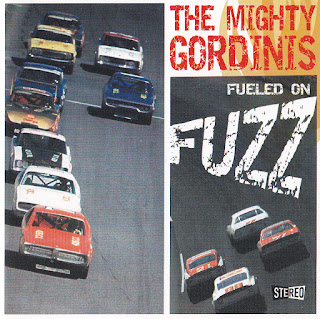 Eleven years after its original release on vinyl and CD, FUELED ON FUZZ the only fully instrumental album of the MIGHTY GORDINIS is finally available for download on bandcamp.

The download features an exclusive and psychotic rendition of SEVEN NATION ARMY, recorded during the same sessions at Jack's Place for a single that never was. 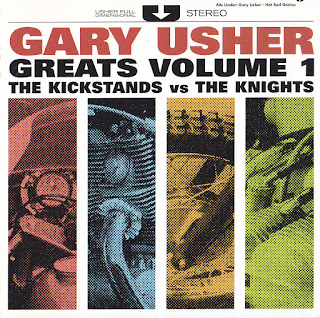 Surf and hot rod genius Gary Usher was a budget-minded fellow -- not unlike director Ed Wood -- who could take a bunch of L.A. studio hotshot ringers into Gold Star studios for an afternoon and cut an album under any number of fake names and come up with something that not only was genre faithful, but pretty fine listening, too. A right-hand man in early times to Brian Wilson, Usher had hits on the charts and cranked this stuff out like sausage. This debut outing of his Capitol cut-'em-quick, cut-'em-cheap LP output combines two of his finer efforts, Black Boots and Bikes by the Kickstands and Hot Rod High by the Knights. The actual lineup of players and singers on these two albums reads like a first-call list on a Phil Spector or Jan & Dean session (Jerry Cole, Hal Blaine, Leon Russell, etc.) and the sound and style is a perfect match for any Capitol hot rod/surf album from that time period. WYATT BLAIR is an American singer and guitar player. After "Banana Cream Dream", his much acclaimed full length debut released in 2013, the man is coming back now with a sophomore effort, "Point Of No Return". Once again, all songs written, recorded, performed, produced, mixed and mastered by Wyatt Blair himself.

Here is a little chat yours truly had with him:

1) What can you tell about yourself? Were you California born and bred like the Flamin' Groovies once said or is this just the place where you now live?
I was born and bred in California! Dana Point, CA to be exact!

3) At what point did you decide to make music? Were you playing in bands when you started out or have you always made music on your own?
Well my dad was a drummer so I grew up with drum sets around the house and he taught me how to play. I always loved drumming and from there it led my curiosity to learn guitar, and bass and sing, and then led me to writing songs. Then led me to engineering and producing so I can make my own records. It's been a snowball that still rollin’ I learn things everyday.

4) About the previous record "BANANA CREAM DREAM", can you explain the title?
The album was recorded & produced by yourself in 2012 but only Mastered and released on record in 2014. What happened in between and what took so long to actually have it out on vinyl?
The title was named by my friend Tomas. I used to wear this banana yellow scarf ALL the time back then, and he used to call it a “banana cream dream” so when i started writing the album I decided to title it that, in honor of my scarf and the concept of complete randomness on the album. Yes, I recorded it on a small 8-track tape recorder. The whole record was done on 8 tracks. It was only supposed to be a Burger Records cassette originally, and never thought it would come out on vinyl. So when Resurrection Records asked me to press it in 2013, I had is mastered and made new artwork in honor of that, and now it is what it is! Thanks Resurrection Records! 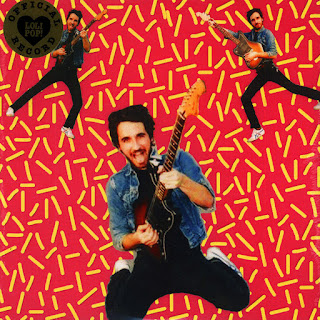 5) The record can generally be seen as a Power pop/glam record except for 2 electro/kratfwerk tracks. Do you consider this as a really weird mix?
Hm, I dunno at the time when I was recording it, I wanted it to be a comedy album, very sarcastic lyrics and have the songs be random in a way. Never listened to much Kraftwerk.

6) Would you like to comment on the cheesy cover art of the record? What was the general idea?
I don't know really, I love funky patterns so I just decided to go with a cut out artwork type deal for the cover and used some pictures my friend Angelica took, and a pic of my dog Jesse on the back (RIP)

7) Is the new record still the work of a solo artist or was it recorded with your live band?
Yes, I started recording it in winter 2014, and took me up until now to have it come out! I had some friends play keys and back up on the record. Chelsea Brown, Louis Filliger, David Loca, Tomas Dolas, and actually my dad plays on a track too! 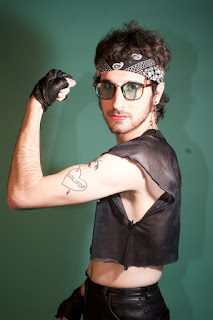 Ronny and the Daytonas - G.T.O. The Best of the Mala Recordings 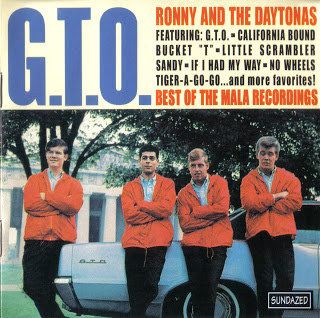 Ronny and the Daytonas - G.T.O. The Best of the Mala Recordings
In WAV - scan are included

Smell that rubber burn! This is the collection you've been waiting for, roarin' straight outta the showroom to shut down all those parts cars that've spent years masquerading as the real thing! Indeed, this one-of-a-kind, ground-up restoration is the only existing production model lovingly compiled from the original lo-mileage Mala master tapes! It's all here -- the hits, essential album cuts, rare singles and more, soundin' better than you ever thought possible! Shipped with deluxe trim as standard: complete group history, introductions by Bucky Wilkin (Ronny) and member Buzz Cason, plus rare photos pulled out of the glove compartment and more! Fueled by a potent blend of mighty muscle car music and superlative 60's pop. G.T.O. is a road-tested delight! Vroooom!! 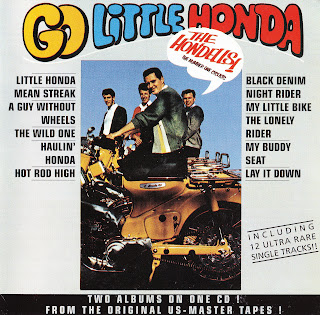 The Hondells - Go Little Honda
In Wav - Scans are included 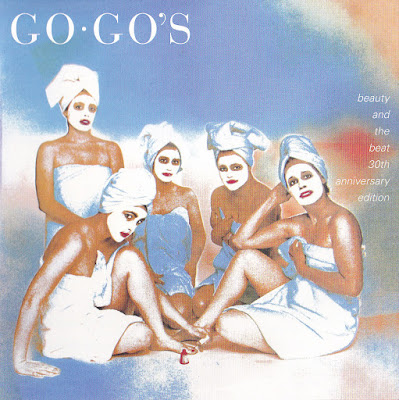 "Beauty and the Beat", The Go-Go's monumental first album from 1981 finally gets a sonic upgrade. Also included is a second disc of the group's live set from that period. Recorded August 20, 1981 at the Club Metro in Boston MA.BEAUTY AND THE BEAT is not just one of the best albums of the 1980s...it's one of the great pop albums of all time.

Bruce Joyner and The Unknowns 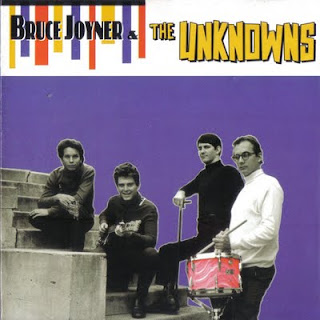 Bruce Joyner and The Unknowns
In WAV - Covers are included

Bruce Joyner with Mark Neill and Dave Boyle initiated the Unknowns in 1980, when moving from Georgia to Los Angeles; Bruce left by the end of 1982. They reformed in 1991, with Craig Packam on drums, for a european tour (and New Rose records anniversary gig), then Bruce left to focus on collaborating with Out Of The Fire, and also because suffering some health problems.

VA - A Tribute To Nathaniel Mayer 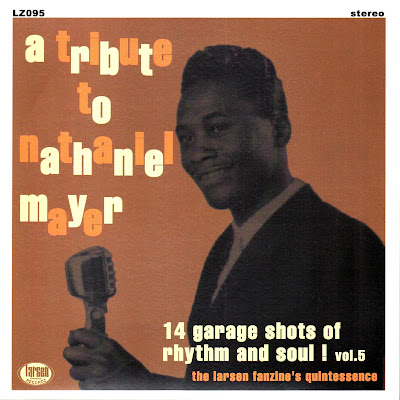 VA - A Tribute To Nathaniel Mayer
In Wav - Scans are included

Don't miss this out! Amazing and seriously out of print compilation on Larsen Records. This was handed over to me a couple of years ago by Patrick, so all the credit goes to him!

John Felice and the Lowdowns - nothing pretty 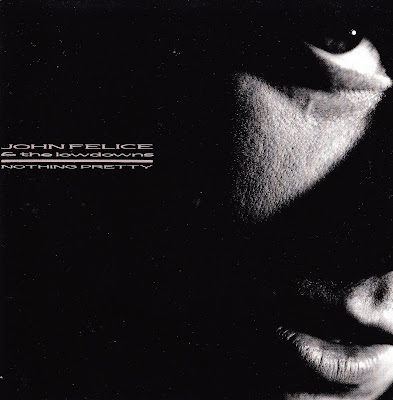 John Felice will always be best known as the beer-fueled, hot-wired frontman for Boston proto-punks the Real Kids, but that band's work didn't represent the full range of his musical abilities, and in 1987, with the Kids temporarily on the rocks, Felice offered fans another look at himself with his short-lived solo project, John Felice & the Lowdowns. With the Lowdowns, Felice wrote tough but thoughtful songs about broken hearts, busted lives, and the dark side of life in rock & roll, and he put ten of them on wax with the album Nothing Pretty. But for an album that dealt so strongly with lives gone wrong, it was sadly appropriate that the album died before it ever had a chance -- it was released by Ace of Hearts the same day their distributor went bankrupt, which prevented nearly the entire press run from ever reaching stores.