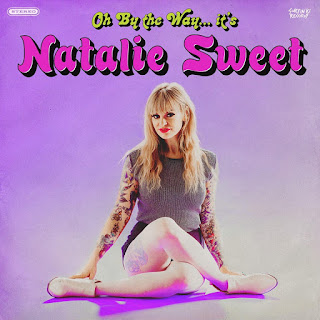 So it was time for this blog to listen to what Natalie had to say about this first solo record.

1) For the viewers of this blog who would not know you, What would you tell to introduce yourselves? Was is your background and Since how long have decided to go solo? We want to hear it all from you!

Hello there, I'm Natalie! Depending on how old you are you may know me from any number of roles in the garage scene. When I was still in college/university, I worked for Get Hip Recordings in Pittsburgh, PA selling records to stores across the USA and Europe. There I met Miss Georgia Peach and together with Travis Ramin we started a small record label called Ramo Records. We released several awesome singles in the mid-00s and even did a short west coast tour with The Little Girls, Nikki Corvette & the Stingrays, and Thee Makeout Party. I spent most of that trip behind the merch table. Later, I lived in Philadelphia and DJed power pop & garage rock all over town with my monthly party Uncontrollable Urge. When I moved to San Francisco I finally started my first band, The Shanghais and later the Control Freaks with Greg Lowery. So, ya know, basically, I've been around. Haha. 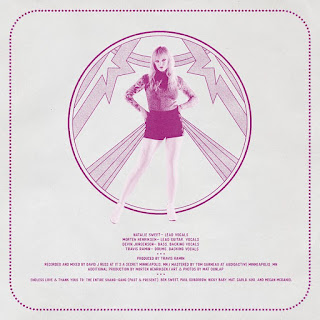 The idea to do a solo album kind of happened by accident! My old pal Travis Ramin wanted to produce a Shanghais LP. It was a dream come true but the band's original lineup had sort of fizzled out at that point. I decided to move ahead with the opportunity to record with Travis with the blessing of my old band mates. It took awhile to get comfortable with the idea but it made the most sense to release the album as a solo Natalie record- this way we were able to go beyond the style parameters set with The Shanghais and venture into some weirder stuff with much more production. The band I recorded with was made up of my friends Travis Ramin, Morten Henriksen, and Devin Jorgenson who was also the Shanghais original bass player! I was extremely lucky to work with these talented dudes, especially since all of them have inspired my music since day one.


2) About your debut full length record,"OH BY THE WAY... IT'S", recently released on Surfin' Ki Records what can you tell about the recording process? Was this a "live" in the studio recording or a track by track recording with lots of overdubs?

The recording process was awesome and crazy. Morten and I flew to St. Paul, Minnesota to record with Travis and Devin at our friend Dave's studio. We had 3 days. That is 3 days to practice together, solidify any tweaks, and then record 13 songs. That is a very tight schedule, my friends. We recorded all of the basics tracks live then I did all of the lead vocals and a few backies. After our 3 days in the studio, Dave, Travis, & Devin continued working on adding extras and more backing vocals. Morten also worked on additional production and those beautiful backing vocals from his studio in Moss, Norway. A LOT of love went into making this record. Again, I feel extremely lucky to have had the opportunity to collaborate with such creative and talented people who completely understand my vibe and what I wanted to make. 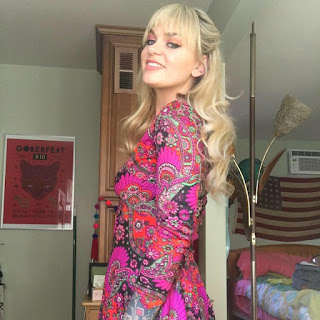 I do not think it's foolish to enjoy the process of analog recording. I've done it several times and it's a
pretty cool and special experience. It makes a true artifact and I love it. But there's also nothing wrong with utilizing all the modern stuff. In the case of this LP we recorded fully digital. Because we had such limited time to work together in the same room we needed to capture maximum output on tape. Dave, the genius that he is, recorded almost non-stop, including most of our rehearsal, just in case. As we were wrapping up our 3rd day my voice was pretty fried from singing nonstop for 3 days and I needed to record a lead vocal for "Pizza Man"-- I was super worried my voice wouldn't be able to handle it in that moment and I didn't want to ruin the song. Luckily, Dave had recorded my rehearsal where I had a great take and we were able to use that! He totally saved the day. Saved by digital haha!

4) Is there a main composer for this record or was everybody involved in one way or another?

This record was a true collaboration all the way around. Most of the songs were co-written by me; a few of them were old Shanghais songs that we never recorded, two songs were written by and shared with me my pal Paul Oxborrow, several songs were written by me and my friend/collaborator/bandmate Nick Colella, Morten and I wrote a couple together while an ocean separated us-finishing IN the studio and creating one of my favorite tunes on the record,  Travis and Devin weighed in with some ideas and excellent arrangements, and, of course, we did two cover songs for fun.

This may be generic but I usually just write about relationships in my life. Sometimes the song is a love letter, sometimes it's all the things I wish I had said, sometimes it's just straight snark. 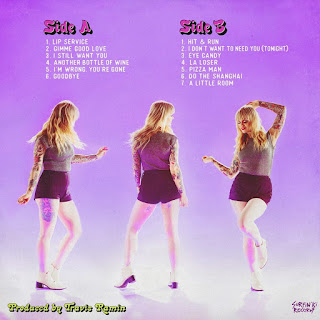 6) To what kind of music did you listen to as a teenager and does it still influence your today work? What was your favorite band as a teenager? Name 3 bands that you consider still have a influence on your own work today.

As a teenager I listened to a ton of stuff and was usually super excited when there were women in the band. I was really into The Donnas, and the Muffs, and No Doubt...but my favorite stuff since childhood was always old doo wop, soul, and 60s girl groups. I also loved the Beach Boys and the Beatles because those were the first LPs I ever listened to on my dad's old stereo. I'd say all of that stuff influences and inspires me today. I mean, I recently saw Donna A at my favorite coffee shop and freaked out! Still obsessed.

Three bands that influence my work lately? I'd say Suzi Quatro, The Marvelettes, and Heart. 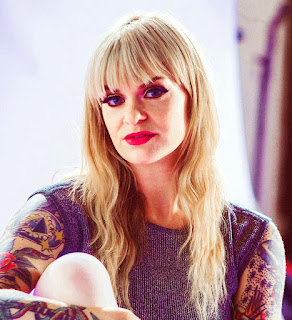 8) What can concert goers expect at a NATALIE SWEET gig? Are you playing any famous cover songs? For the recording you could count on an amazing backup band featuring Morten Henriksen of The Yum Yums , Devin Clark Jorgenson of Color TV and Travis Ramin of Nikki Corvette & the Stingrays. Will these guys all tour with you as well?

You'll have to stay glued to find out! What you can know for sure is our show will be bananas, super fun, and filled with surprises. Will we come to a town near you? You decide!

9) Are there any bands today in the USA you consider yourself close to?

Yes, every single band that one of my friends plays in...which is a lot of bands :) I love you all.

11 YEARS of this BLOG 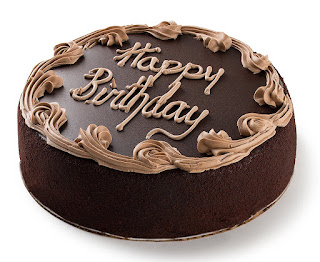 Today is a VERY special day, not only because it's the birthday of yours truly but also because we celebrate 11 YEARS of this BLOG. 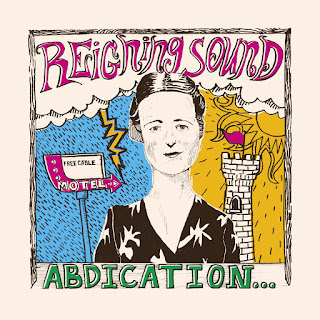 Reigning Sound - Abdication… For Your Love
In FLAC - Scans are included

That is one hell of an ugly record cover but the music inside is great.