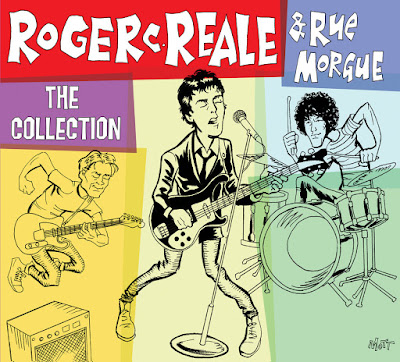 So it was high time for this blog to have a conversation with the man himself. Here it goes.

1. For the viewers of this blog who would not know you, what would you tell about Roger C. Reale and Rue Morgue to introduce yourself? How long were you together as a band? Who was playing what instrument in the band?

I signed to newly formed Big Sound Records, Wallingford, CT., in 1977. I already had a notebook of songs that would eventually become my first album, Radioactive, and had started some of the songs which would appear on my second album, Reptiles in Motion.

Big Sound was an American label, which sort of patterned itself after Stiff Records in the UK. That is, they deliberately went out and signed bands/musicians who were a bit under the radar. I was about as far under the radar as you could get!  I didn't even have a band at the time of signing.

Rue Morgue MK 1: GE Smith, guitar; Hilly Michaels, drums.  Hilly was coming off a tour with Sparks and I knew GE from The Scratch Band, another Big Sound signing.

Rue Morgue MK 2:  Jimmy McAllister, Mick Ronson, guitars; Hilly, drums.  Jimmy I met through Hilly; he also was on the Sparks tour.  Hilly brought in Ronson, after Mick had heard Radioactive, and asked if he could come down from his then home, in upstate NY, to play on the next one, which would be Reptiles. 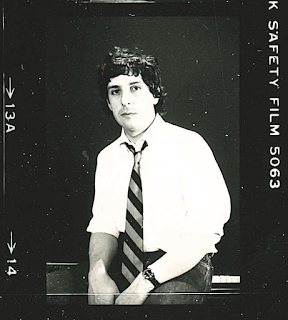 2. About the recently reissued CD "The Collection", what can you tell about the recording process? Was this a "live" in the studio recording or a track by track recording with lots of overdubs?

The Collection actually consists of two LPs: Radioactive, which was issued on vinyl only in 1978; and Reptiles in Motion, recorded in 1979, and never issued until now on Rave On Records.

The approach to Radioactive was to record live in the studio with very little overdubs. We recorded all the backing tracks, with live vocals, in one session, pretty much like on the job. Later, GE added a few guitar bits, and I added backing vocals, but what you hear is essentially a live band.  We just went for it.

With Reptiles, I wanted to progress with the same feel, but spend more time on each track, treating each song as its own entity rather than the complete adrenaline rush of Radioactive. However, I was very keen on retaining some sort of identity for Rue Morgue, as far as the energy and the feel of the songs. I wanted the second LP to be seen as a logical progression to the first. The key, for me, was that the rhythm section remained intact, with me and Hilly, so the identity was there; you could essentially put anything on top and it would remain Rue Morgue.

Obviously, having Mick in on the sessions was an amazing encounter and opportunity; we bonded immediately, and he and Jimmy worked out their parts.

Again, the basic tracks were recorded, but this time, we agreed to return to finish anything left undone. Everyone went their separate ways, and I returned, from time to time, to work on vocals, and assorted overdubs. Finishing Reptiles would never happen, as Big Sound folded for a variety of reasons, and Reptiles remained on the shelf until now.

3. If you had to record new songs today would you use the nowadays recording technology or do you only work with analog machines in analog studios?

I've recorded four CD's with my band The Manchurians and two solo CD's. I'll work in any studio, or use any method that helps me get my sound across. I have no real preference. For me, it's all about the feel. I never go into the studio without knowing what I want, and I work very quickly. Of course, I'm always open to advice, suggestions, but I'm always prepared.

4. To what kind of music did you listen to as a teenager? What were your favorite bands as a teenager? Name 3 bands that you consider still have an influence on your own work today.

I listened to everything on the radio, but particularly Chuck Berry, Little Richard, and Bo Diddley. Then all the British Invasion bands:  Stones, Beatles, Pretty Things, Yardbirds, Who, Small Faces, and all the stuff that you had to hunt down because it wasn't being played on the radio, like Jimmy Reed, Muddy Waters, Howlin' Wolf, and John Lee Hooker.

Three bands that still have a major influence on my work today:  Pretty Things, Stones, Yardbirds, and WHO...that's four!

5. What was your favorite topic/topic that came easily when you wrote a song?

I don't write songs on topics; I pursue whatever melody, riff, phrase comes into my head...sometimes it comes every day... sometimes you go weeks with no messages. People politics; situations; observations. No particular point of view.

6. How would you describe the music you were playing back then? Was it powerpop? Do you agree with this label? Are you proud of it or do you consider there is way more than that?

Back then, and now - Radioactive and Reptiles, I consider rock n' roll. I'd be very happy with that.

7.  Do you have a video on youtube featuring a track from The Collection?

“She’s Older Now” video tells the RCR&RM story while the track plays from the LP.

8. Way back in the day, what could concert goers expect at a Roger C. Reale and Rue Morgue gig? Were you playing any famous cover songs during the gig?

Rue Morgue (with Hilly and Jimmy) actually only played one showcase gig in New York City at a club called Hurrah.  We played songs from both LPs, and we were well received.  I can't recall playing any cover material at that gig, although we recorded a few on Radioactive. There are no covers on Reptiles, although that band (Jimmy, Mick, Hilly) recorded a version of The Jook's Aggravation Place, which remains in the vaults.

9.  Were there any bands in the USA back then you consider yourself close to musically speaking? 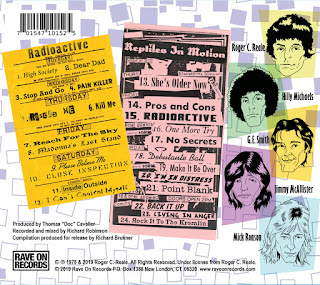 I tended to identify more with what was happening in the UK at the time:  The Jam, The Clash, Elvis Costello, Rockpile particularly, although, early Cheap Trick and The Raspberries certainly figured as well. Vocally, I didn't really sound like anybody else, so I wasn't concerned.


10. Is there any chance for new recordings seeing the daylight one day soon?

I've never stopped recording. I currently play and record with The Manchurians, and I've recorded two solo CD's. Right now, they're available on Bandcamp. As for a Rue Morgue reunion?  Unfortunately, Mick and Jimmy have passed. Hilly and GE are still here, so I'd never say "never"!

11. Anything you wanna add?

Thanks Eric; I am humbled that you are interested, and happy to oblige!