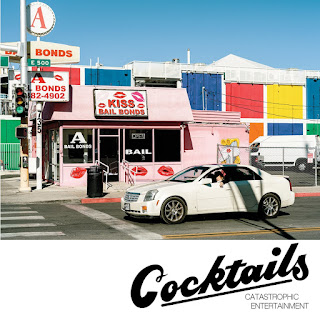 Cocktails third full length record, "Catastrophic Entertainment" was very recently released on wizardsandpotions records in the USA and on Alien Snatch! Records, for the UK and Europe. As for every Cocktails album, this one is filled with catchy tunes and their tribute to Bun E. Carlos is certainly  not the least of it ! Without any possibility to play the new songs in front of an audience, the best thing to do was to have a very interesting chat with singer and guitar player Patrick Clos. Here it goes.

1) For the viewers of this blog who would not know you, What would you tell about The Cocktails to introduce yourselves? How long are you guys together as a band? Who is playing what instrument in the band nowadays? How are you doing in these strange times?

So real quick, it's just "Cocktails" – without the "The". Apologies for nitpicking, "The Cocktails" always sounds like a lame wedding band or something lol. In terms of an introduction/describing our sound, I always describe us as a scrappy power pop band. I guess we're not very polished, maybe that's part of the charm? It also depends though on who I'm talking to: For my dad, I’ll just say "we sound kinda like Cheap Trick." If it’s the record store guy, I'll say some shit like "think 20/20 meets fuzzy Apples in Stereo with a little Lemonheads.” Haha, I’m clearly bad at describing us. The short answer might be "Catchy rock."

We've been a band since 2012. So a really long time in band-years. Our first EP came out in 2013 on Father/Daughter Records.

In terms of who plays what: I play guitar and sing, Joel Cusumano plays the better guitar parts, Lauren Matsui plays synth and sings, Rob Goodson on bass, and Phil Lantz on drums.

Pretty much all of this crew have been involved in this record has in some way been with us since our first record. But over the past year, our line-up is kind of rotating. The band is almost like a collective of sorts given everyone’s hectic schedules and life stuff. It's really whichever honorable homies are available that can step up and help us bring our tunes to life!

In terms of how we’re doing - damn, strange times indeed! It’s been a rough several months here in the US to be honest. I almost don’t even want to get into it right now for fear of ranting. But yeah, it’s been real fucked up. That said, we’re healthy at the moment, which I'm thankful for. 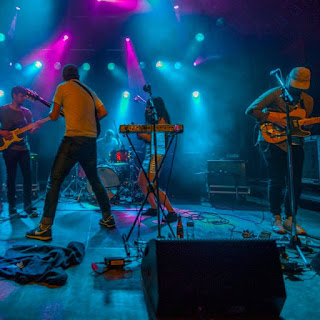 2) About the newly released full length record "Catastrophic Entertainment", what can you tell about the recording process? Was this a "live" in the studio recording or a track by track recording with lots of overdubs?

It took a really long time! Not like recording, that was actually fast and just a handful of weekends – but the process was spread out I think a little over a year. We all have (or had pre-COVID) jobs and most everyone was busy playing in different bands and the time. We recorded I think 7 tracks in a studio in Oakland, and then we recorded a few more on our own. Phil Lantz does engineering/mixing for a living, so we felt comfortable just finishing it ourselves.

We’d typically get a solid "live" take of just drums / guitar / bass, and then we just build the tracks out from there. We strayed from that process a few times on this record, but generally we'd over-dub all the vocals, lead guitars, and synth.


3) Do you use the nowadays digital recording technology or do you guys only work with analog machines in analog studios?

We use a combination. We get the core tracks down on tape, and I think some of the overdubs too. And then we do the vocals and synth and remaining stuff after we’d bounced the core tracks over to Pro-Tools.

I do most of the songwriting – but Joel Cusumano also writes songs for the band and has a couple songs on this new record. And then yeah, everyone gets involved once we have the basic idea down. Sometimes people will bring different arrangement ideas or helpful tweaks and we just kind of work it out live before we tape it. 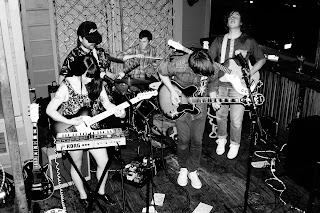 I’m not sure I have a favorite – I'm usually at a loss for lyrical content lol. But some interesting topics came up on this new record. "Washoe County" is about a trucker that's addicted to gamblin’ and boozin. "Buried Alive" was a take on cancel culture / internet pile-on / bullying, etc.. "Never Be Alone" was written not long after I got married, and as much as I love to write bummer/cynical/sad-dude lyrics, I really wanted the total opposite of that for at least for this song. I love Joel's song, "Nobody's Going to the Movies" – taking such a simple idea as a love for going out to the theaters and watching action movies and turning that into a song and there's a relationship tie-in, there's something kinda sweet about that. And it was almost prophetic – given that right now we can't go see a movie – I guess we took all of that stuff for granted. But yeah, the topics/themes are all over the place.

Speaking for myself, I grew up basically in the middle of the US in a pretty quiet and conservative town. Discovering stuff was difficult! At first mainstream "alternative" radio was huge for me, so of course bands like Nirvana, Weezer, and Green Day – that stuff prompted me to ask for a guitar one year for Christmas. 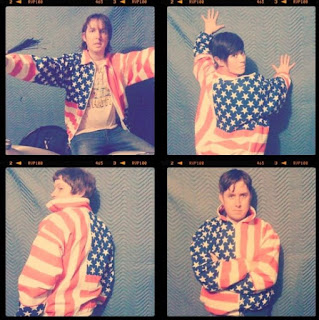 Later I'd save up cash and drive sometimes hours with friends to go to a cool record store in St. Louis or Kansas City. I got a MAGNET magazine subscription which is how I got turned on to more indie stuff. Luckily I found the other kids at my school that were into stuff like Elvis Costello and the Beach Boys, and we'd make each other tapes and mix CD's. It was hard to find people at my high school that were into stuff beyond like Pearl Jam and Dave Matthews at the time. But I got really into records from bands like Fountains of Wayne, Letters to Cleo, Nada Surf, and Superdrag, along with a ton of 90's Brit-pop stuff.

Weezer was hands-down my favorite as a teenager with those first two records – goddamn! All of those bands still influence Cocktails stuff for better or worse. And then later I went down a deep emo hole and was eventually saved by college radio – discovering all sorts of stuff including 70's punk and more lesser-known rock bands.

No, and it's a total bummer too because I HAD a video shoot completely scheduled and planned for "Bun E. Carlos." I had found an awesome videographer and everything. And then our shoot landed on I think the first day of the year that it rained here in San Francisco and I had to reschedule everything. The following week the government shut down the city due to COVID-19 and I decided to scrap the project. Hopefully we'll get a rad video done for the next release! I did however create a cool little found-footage video for a b-side / rarity called "friend weekend," which was made in early quarantine. The video itself is really corny, but I thought that was funny and I was going for like some 90's MTV buzz-bin feel-good shit.

8) What can concert goers expect at a gig of  Cocktails? Are you playing any famous cover songs?

Ah man, live music seems so out of reach right now due to COVID-19 - especially here in California, but I really do miss it! Concert goers at a Cocktails gig best expect to get ROCKED! Ain't no two ways about it lol. I'm joking – we're not that confident, but you know, we're a noisy guitar band, so we bring a little heat. We really just bash out our songs. It's pretty raw. Maybe some missed notes here and there. Definitely some rippin' solos... It's kind of like a Guided By Voices or Superchunk show except no one is shouting our songs back at us. I need to fix that part lol.

In terms of covers, we've done songs by The Undertones, The Lemonheads, The Primitives, The Only Ones. If/when we tour again, we'll try and bring some fresh covers. I was working out a version of "So Sad About Us" by the Who, but more similar to The Breeders version – maybe we'll bring that one. We also did a recent Fountains of Wayne cover on this great comp/tribute to Adam Schlesinger, so we may bust that out too. We'll bring a few surprises.


9) Are there any bands in California today you consider yourself close to, musically speaking?

I've been really out of touch with current California bands. Our pal Ray (R.E. Seraphin) just put out a great record. It's really fun guitar pop stuff. While not in California, there's a few new bands I recently discovered: There's a band called 2nd Grade out of Philly, and I really loved that record. There's also The Whiffs – from Kansas City, if you like 70's power pop stuff, they have it completely dialed – it sounds like the Nerves or something. I love their stuff.


10) You describe your music as being "pop music for nice people". Can you explain?

Oh right, that's from our Twitter account or Bandcamp page. I can't quite recall, but It's basically meaningless lol. I just thought it sounded cool. Kinda like that one Nick Lowe record title "Pure Pop for Now People," which was the alternate name for "Jesus of Cool" - such a sick record!

11) What are the plans for 2020 as far as The Cocktails are concerned?

Well, our plans have basically been crushed this year. 2020 has been a disaster. But while we're not really able to tour or play shows in support of our record, I have been writing some new Cocktails material, so it's great to get that process started, and it's been therapeutic. So hopefully one day we'll be back!

Since we're not able to play shows, I must do the obligatory "we have merch!" shoutout lol.

If you're in Europe/UK, get our new record from Alien Snatch! Records,
https://aliensnatch.bandcamp.com/album/cocktails-catastrophic-entertainment

or you can buy the record directly from us at wizardsandpotions.com. Peeace! ✌