Lucy and the Rats - Got Lucky 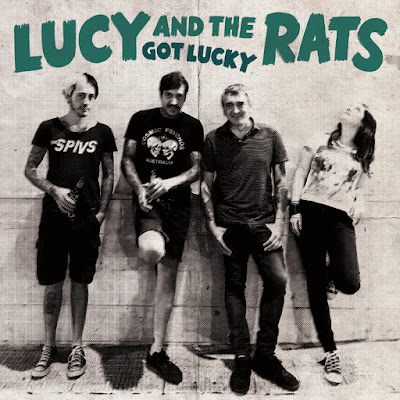 After several singles and their 2018 debut album which received lots of praise around the world, Lucy and the Rats are back with their sophomore album ‘Got Lucky’.

Some say that the brilliance of Lucy and the Rats lies in the collision between Lucy’s angelic voice and pop sensibility and a barely-tamed bunch of punks. A Frankenstein’s monster of sounds fused together to make something special and unique.

1) For the viewers of this blog who would not know you, What would you tell about Lucy and The Rats to introduce yourselves? How long are you guys together as a band?  Who is playing what instrument in the band nowadays? 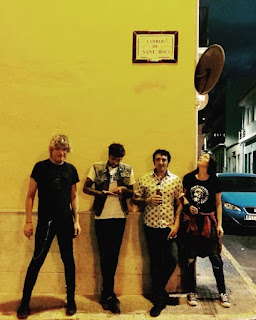 We’re a 4 piece band from London. We’ve been playing for about 5 years. I play bass and sing, Liam and Joe on guitar, and Manu on drums.  We’ve all played in a bunch of other bands in the past that were pretty different to to what we're doing now - more garage and punk for the boys, and I played in a girl band - so this is a change for all of us. The guys all still play together in another cool band called Johnny Throttle which is more garage/punk. Check ‘em out!

2) A personal question: do you sometimes miss Australia? and if so, what exactly do you miss the most?

Of course! Yes, I miss Australia. I miss my friends and the bars, and the rock’n’roll over there - but it's still there. It's great to visit and I try to get back there at least once a year. I really love living in London though.. there are great bands here and across Europe, loads of festivals and fun to be had over here too.

We don’t really mind. Usually studios these days will record digitally, and it’s much easier than recording on tape. Tape is cool and sounds great but I don’t think the difference is that noticeable. I don’t think we really mind either way.
There have been times that I’ve been really happy that we recorded digitally because if I want to change something or add something I can just record at home on my computer and send the stem files back to the mixer.. that’s been really handy!

I’m the main composer and come up with most songs structures.. like the melody, lyrics and chord progression. Then we’ll play it as a band and see what we hear and how everyone wants to play it. Joe and Liam also write songs and it's really fun to break it up. We did a 'Joey and the Rats' single on Stardumb Records with a couple of Joe’s songs and that was great! More punk than our usual stuff but still fitting to who we are. 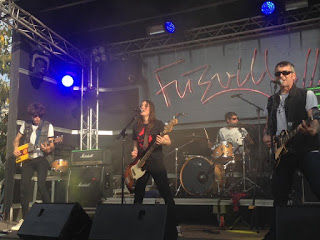 The usual ‘love’ stuff. But I tend to write songs about my life and what’s on my mind.. I just stick ‘baby’ and ‘honey’ in there from time to time, and when you do that the song can become about anything. Like a horoscope.

I listened to a lot of 50’s and 60’s pop. I have always loved girl groups like Chiffons, Shirelles, Ronettes. Also Beach Boys, Buddy Holly and that stuff. I love that the guys in the band are also into Australian rock’n’roll like Radio Birdman and The Saints.. that that’s where we meet schools. Also Blondie and Buzzcocks where pop meets punk. I think we’re influenced by all of this.

7) Do you have a new video on youtube featuring a track from the LP?
Yeah.. we have a couple! I dig them both.

Here's one for our song “September"

8) What can concert goers expect at a gig of Lucy and The Rats? Are you playing any famous cover songs during the gig?
Not yet. We only do original songs for now. When we hang out might be listening to music and someone will say ‘hey  - we should cover this song’ .. but we haven’t actually followed through yet.

9) Are there any bands in England today you consider yourself close to musically speaking?

Some really good bands here in London right now are The Speedways and More Kicks. I can’t get enough of those guys. I would compare us to them from a musical perspective where it’s the pop side of the rock’n’roll spectrum but we also all have our differences. Some of our recordings are a little more sweet and mid tempo, and we have girl vocals. Playing live we ditch the girl harmonies and play with some more energy and I’d say we sit in the same school while all having our own differences. 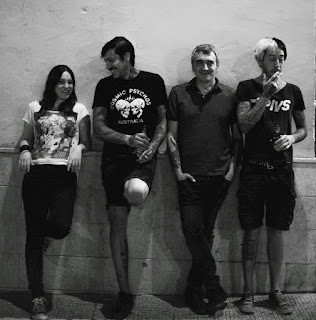 10) How would You describe the music you're playing?

Rock’n’roll!! I wouldn’t call us punk or anything. People love to use the term power pop and I agree with that but I would describe that as more melodic rock’n’roll.

We originally had a lot of plans for gigs and stuff this year but unfortunately with lock downs and quarantines and all the bullshit this year it’s all been cancelled or put on hold. We are excited about out album coming out in July!!

Special Thanks to Stefan! :-)