8 YEARS OF THIS BLOG 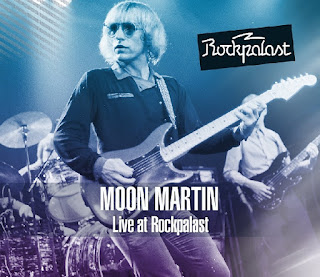 Today is a special day, not only because it's the birthday of yours truly but also because we celebrate  8 YEARS of this BLOG.

And what a better way to celebrate than with ...

MOON MARTIN Live at Rockpalast
In WAV - Scans are included

Oklahoma-born John Moon Martin is an American singer-songwriter whose songs were picked up and turned into hits by others.The nickname "Moon" was added to distinguish him from Brit song writer John Martyn, and it also recognizes his frequent use of lunar-related imagery in lyrics. He was described by author Johnny Rogan as a cross between Buddy Holly, Warren Zevon and John Denver .His late 60's session career as a guitarist-for-hire saw him backing Del Shannon, Jackie DeShannon, Gram Parsons and Linda Ronstadt. He contributed to Mama Michelle Phillips debut solo album, Victim Of Romance (1977). His band Southwind shared stages with the Byrds and the Flying Burrito Brothers. He also found fame in the New Wave era, when he was backed by Gary Valentine, former bass player for Blondie and was produced by Craig Leon .

Rock on and Surf's up!

A. Happy birthday
B. Congrats on the longevityof your blog.
C. Love this place.

Happy birthday.
Are you a Hobbit because I thought it was only Hobbits that gave gifts on their birthdays?

Love your blog. Thanks for all the work and time you've put into it. You've turned me onto a lot of cool stuff. Cheers!

Thanks for all those years of good music.
Happy Birthday !!!

Bravo & congratulations! Thanks for the good vibrations

Congrats! One of my fave blogs....ever!/bosshoss

Happy Birthday. Thankx for all.

I had no idea this even existed, and I'm a big fan of Mr. Martin.

Congrats on 8 years of one of the best blogs out there!

Hey, i know i'm late for this post but congratulations for the eight years friend, amazing.