Beat City Tubeworks - I Just Cannot Believe It's The Incredible 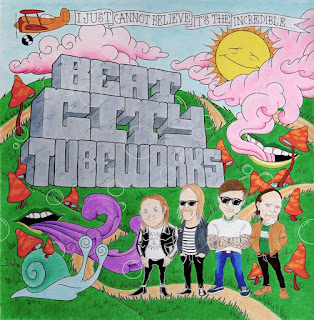 Some weeks ago, when this blog interviewed Andy of GRANDE ROYAL and asked if they felt close to some other Swedish bands, his answer was: "From our hometown, we have Beat City Tubeworks. Look them up if you haven’t heard them. They kick ass". Well, ladies and gentlemen, brothers and sisters, it appears that Andy was damn right, this band really does kick ass! So let's hope that Beat City Tubeworks will get signed to Sign Records as well to release their sophomore effort! Lets talk with Erik Linder, guitar player and singer of the band.

1) For the viewers of this blog who would not know you, What would you tell about Beat City Tubeworks to introduce yourselves? How long are you guys together as a band?  Who is playing what instrument in the band nowadays? Can you explain the name of the band and  how you came up with that name?

Beat City Tubeworks is a rock'n'roll band formed in Jönköping, Sweden in the end of 2014. Three out of four of us used to be in a band called The Horsehead Union. When that band was put to an end back in June of 2014, we pretty much started Beat City Tubeworks shortly thereafter!
Beat City Tubeworks is: Erik Linder: Guitar and Vocals, Kristian Rigo: Guitar, Henrik Frisk: Drums, Stuart Bayliss: Bass 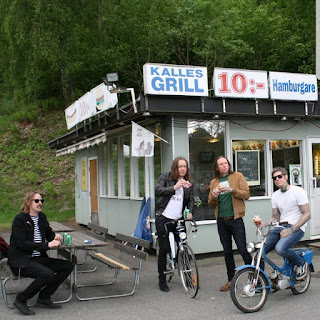 About the name of the band.. Back in the 70's in Detroit, there used to be a rock’n’roll Music TV-show that simulcasted with local radio stations. It was called Detroit Tubeworks.. They aired a lot of great live footage of great bands like Black Sabbath, Alice Cooper, MC5, Amboy Dukes to name a few..

We first thought that the name "Detroit Tubeworks" sounded cool, suitable, and somewhere in the ballpark what we wanted as a name, but yet we found the word "Detroit" is a bit cliche!..and already done! especially for a Swedish rock'n'roll band!

So after some playing around with words, we finally ended up changing the word Detroit to "Beat City", it's slang for describing a place or a thing that's dead, on decline, or completely worn out!

2) About the full length record "I Just Cannot Believe It's The Incredible",  what can you tell about the recording process? Was this a "live" in the studio recording or a track by track recording with lots of overdubs?

It was originally intended to be an digital 7 track E.P. at first, but we only released three of these songs as singles (Rat Race, Decline To Conform, and Frenetic Magnetic) and held on to the rest.. A while after that (half a year or so) we decided to add new songs and release it all as a complete album, so we went back in to the studio, and recorded an additional 6 songs.

The process for the whole first album (both sessions) was quite simple.. drums and rhythm guitars recorded simultaneously live in a studio, and then we added bass, some licks and guitar solos, and all the vocals with some overdubs!

All in all, i think the whole recording part of that album took us 6 days. The mixing part was a completely different story Haha!

Get two completely separate recording sessions to sound as one take, is not a simple task for a studio producer, but we think that our studio man (Ulf Blomberg at Hoborec studios) did a excellent job on our first album all things considered! 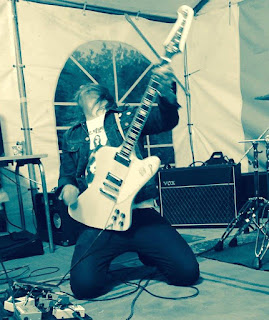 Hmm.. Of course you always strive for that 60's 70's analog rock'n'roll sound all the way, but to be a TRUE puritan, and record a whole album from scratch analog (every process from start to finish)..nowadays.. Mixing and cutting completely analog, mastering included, and send in analog tapes to a studio to cut masters from? Hmm.. doesn't seem like a easy one to pull off if you ask me.. Is it really worth the effort? I'm not by any means in a position or profession to talk about what or what not to do regarding studio work, but it just seems like a tad overambitious.. Especially with the great digital software, tools and tricks and plug-ins nowadays, you can get a quite deep and warm vintage sounding result by quite simple means..  However..on this album, Reel-recording was used to some extent. (hope i get this right!!)

Digitally mixed tracks was put through a vintage studio reel-recording device by our studio guy, and then played back again as a analog track file, to get that small vibe of analog sound.. How and if it works for the better, i don't know thou.. haha!

Beat City Tubeworks is in fact a fully functional democracy.. We're talkin’ about four stubborn strong characters here though haha! It usually starts with that me, or Kristian has got some riffs, or some parts for a new song, and then we'll just work something out from there..

All the members are involved in the makin' of songs in some way, by adding their own touch to the song, and then we decide the direction of the process of the rest of the song makin’ in consensus .. Vocals and lyrics is most often added in the end. Our drummer Henrik and i share the lyric-writing part, and then i work on a song melody suitable for the register in my voice. 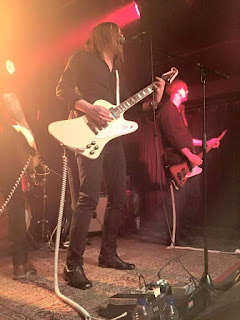 The everyday life.. i would say! strange personalities, fucked up relations, love, hate, passion, death.. etc! It really depends on the mood i’m in that particular day.. Me and Henrik has really different approaches when it comes to lyric writing.. My lyrics often tend to be of a story-telling kind, and Henrik’s writing is often more cryptic and dark in a cool way.. They all complete each other in a good way!

6) Beat City Tubeworks could be described as an "High Energy" band in the vein of Grande Royale, The Hellacopters, Marvel or the Sewergrooves. Do you agree with this label? Are you proud of it or do you consider there is way more than that??

I can clearly see why people think so, but yet i'm frankly quite tired of people subdividing all bands into the "high energy" and "action rock" department. Beat City Tubeworks plays rock'n'roll!

Of course The Hellacopters influenced us big time.. We all listened to their music in the 90's and 00's in Sweden along with bands like Nomads and Union Carbide! On the other hand.. Hundreds of other bands from loads n' loads of other genres and eras has also influenced our band greatly. Every member of our band has a huge spectra of genres they listen to, and we are fans of all kinds of weird fucked up music.. but when we came to chose what to play in Beat City Tubeworks, the consensus just boiled it all down to our least common denominator.. good ol'swedenized rock'n'roll all spiced with our wide influences and ideas! (Even though i recall our first song ever rehearsed in this constellation was "information overload" with Baby Woodrose, and they're Danish!..Haha!)

And by the way, I do like Märvel a lot, and Grande Royale is friends of ours, and rehearsal room neighbors.. A great rock’n’roll band!

No.. not yet, but there will be! We only have a couple of low-budget videos now from our previous album now.. the single track "Rat Race" being one of them! Our new album is now all recorded, mixed and mastered, and we are all super satisfied with how it all turned out! Our goal is to release a couple of music videos quite soon with new songs to reach more people with our music! Time will tell..


8) What can concert goers expect at a Beat City Tubeworks gig? Are you playing any famous cover songs?

Approximately 55 minutes of no holds barred, all guns blazin' loud hook’y extravagant rock'n'roll, and about 5 minutes of cheesy vague pre-rehearsed talking between songs..hehe! We’ve got some covers to play, but the thing is we never get to play them live, since we're always running outta stage time! haha..


9) Are there any bands in Sweden today you consider yourself close to?

In terms of playing style/music wise? not really.. So hard to answer..it's really up to others to be the judge! Of course an easy answer would always be to drop a name of any other famous 70's inspired open-G rock'n'roll bands of today haha, but i really think that us as a band (and other bands as well) has more uniqueness, and qualities in the music making to offer than that!


10) Was the LP "I Just Cannot Believe It's The Incredible" released on your own label? How much copies were pressed? Was this expensive?

We released "I Just Cannot Believe It's the incredible Beat City Tubeworks" under our own flag, all by ourselves, except for some help from our friends with artwork, distro, etc.. No label involved whatsoever!

It takes a lot of work and effort releasing an album, so we were very pleased the first LP was received well by people that are into our music!

This time around with our second album, we are working on finding a suitable good record label for some collaboration with us, and our brand new unreleased album! It's just too darn good to be released by ourselves.. Take my word for it.. We wanna reach out to the people!

About prices and costs.. Of course releasing an full length album (especially on vinyl) is not the cheapest and most effective way to reach out with your music, but it's a goddamn near religious feeling when you finally hold 180 grams of your own music in your hands.. worth every penny!

You haven't released an album until it's on vinyl! Basta! We used gig and merch money to create the LP.. I think it was limited to 400 copies

If you guys like what we do, and are into our music, please give us a like on our facebook page, or follow on instagram, for news, updates etc. From there you can always support us by buying merch, vinyls, t-shirts..We're also on spotify, apple music, deezer and such..

Do yourself a favor and get a copy of this amazing vinyl album. 180 grams of pure rock'n'roll, immortalized on fat thick black vinyl, covered with a high gloss laminated cover with thick spine, and It comes with a full color lyrics leaflet and a free sticker
The price is only 14€ (130 sek) plus shipping. Payment is done via paypal. Send Beat City Tubeworks a message and provide them with address and full name, and they will tell you the full price for the album with shipping included.