"At Home With Satan's Pilgrims" re-issued on Green Cookie Records 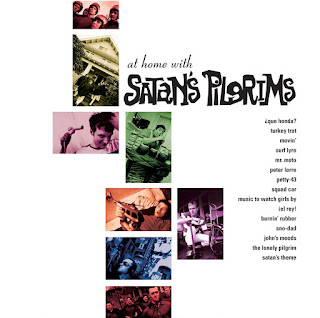 Originally released on eMpTy Records in 1994, "At Home With Satan's Pilgrims" was re-issued a couple of months ago on Green Cookie Records. The Album was specially remastered and comes in a beautiful red vinyl. This record has become a classic of surf music and includes such famous renditions as "Mr. Moto", "Squad Car", "Movin'" or "Music To Watch Girls By".

So it was time for this blog to have a very interesting conversion with drummer extraordinaire TED that tells us everything we always wanted to know about this band featuring no less than three guitars.

1) For the viewers of this blog and in particular for the younger generations who might not be well aware of instrumentals bands, What would you tell about The Satan's Pilgrims to introduce yourselves? How long are you guys together as a band?  Who is playing what instrument in the band nowadays? Are these all the same guys as when you started out in 1992?

Hello, we are Satan's Pilgrims! We started in 1992 so we are in our 27th year as a band-though there was a time where we didn't play or record between 2000-2004, and since then we play a limited number of times per year, and have been making new records again since 2009.  We are very lucky and proud that we have the same original members that we started with: Bobby and Scott on guitar, Dave on guitar and keys, John on bass, and me, Ted, on drums.

2) About Your first full-length album, "At Home With Satan's Pilgrims", originally released in 1994 and recently re-issued on Green Cookie Records what can you tell about the recording process? Was this a "live" in the studio recording or a track by track recording with lots of overdubs? 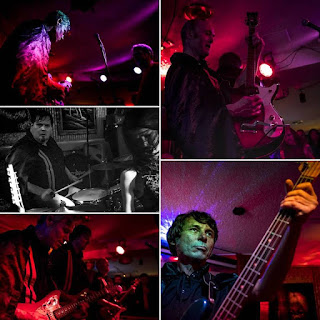 I remember that we recorded and mixed it very quickly, in just a couple of days. We had practiced all of the songs and couldn't afford a lot of time to fool around. We recorded it the same way we have done it since, which is to record it live, or at least the bass, drums, and rhythm guitars live and overdub any leads, percussion or keyboards if the song calls for them.

3) When you look back on how tracks were recorder back then and how most of the music is recorded today, do you consider it should be foolish not to use the nowadays recording technology or do you guys still work with analog machines in analog studios?

No, not at all. We prefer analog, when we can, but have had to use digital sometimes because the circumstances require it. When we do use digital, we work hard to make it sound as analog as possible and often run the tracks to tape to "warm them up".

Everyone is involved one way or another. Often one of us has the original idea. We may ask for input from one or more of the other guys to help co-write, but many times they might finish the main idea. Either way, it is presented to the rest of the band, and we all come up with our respective parts. Because we have always worked this way, we have always credited the entire band with the writing credits and have shared all of the royalties equally. 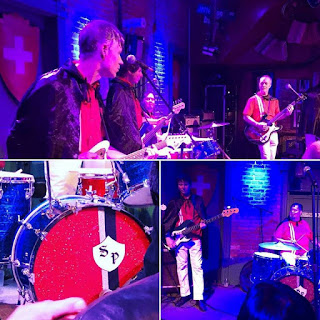 5) To what kind of music did you listen to as a teenager and does it still influence your today work? What was your favorite band as a teenager? Name 3 bands that you consider still have a influence on your own work today.

For me, personally, it kind of depends on which years you are talking about. As a young teenager, it was a combination of lots of 60s stuff (oldies-pop, soul, British Invasion etc),whatever punk, new wave, and "college rock", as they used to call it, and because I was in jazz band and my uncle gifted me a bunch of classic bebop records, I was into a lot of that too.
Because I probably listened and played along to them the most, I would say The Who (especially 60's era) were my favorite band.
It's really hard to pick 3 bands that still have an influence on me, but I will say The Beach Boys, The Ramones and The Who. I still listen to those three all the time. 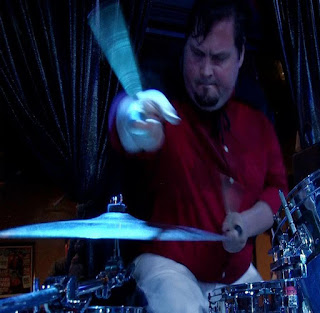 6) The Satan's Pilgrims started out more as a "Surf band" but in 2009 you recorded the 60's psychedelic/garage influenced instrumentals "Psychsploitation". Lately, it seems you guys went back to your Surf roots? Do you agree with this? Are you proud of it or do you consider there is way more than that?

We are very proud of "Psychsploitation" and it was a side of us that we wanted to do a full album of, even though we had dabbled in it here and there throughout our releases. We always just thought of it as a standalone record, not as a "new direction". We went back to surf and ended up making our most trad surf album, "Siniestro", since "Around the World With Satan's Pilgrims" back in 1996.


7) Do you have a new video on youtube  featuring a track from the newly re-issued LP/CD??

Not that feature the remastered versions. Everything on YouTube is older.

I hope they can expect a lot of fun and some dancing! We don't play very may cover tunes, and usually the ones we do play are not very famous. We don't play vocal tunes either, except on a very rare occasion, for just one song.

9) Are there any bands in Portland, Oregon  today you consider yourself close to? 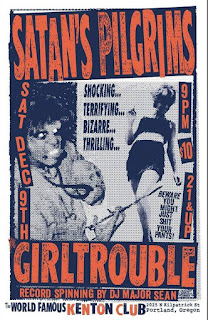 We are still close to some bands in the Northwest, but they are friends of ours from back in the 90's, not new bands. The bands that come to mind are The Boss Martians from Seattle and Girl Trouble from Tacoma. So, from the same region, but not from Portland specifically.

Just that we are really grateful to be have people still interested in our music for over 25 years. We really appreciate being able to play when we can and meet fans who saw us back in the 90's alongside younger fans who are seeing us for the very first time.

This is the third time that a label like Green Cookie has reissued one of our older albums. Back when we were originally recording these, especially "At Home With Satan's Pilgrims", we were hoping to maybe sell some copies regionally and have something to sell at our shows.

We never expected that we would make as much music as we have been able to make with the original 5 members and have people interested in it enough to have reissues made. Thank you to all of our friends and fans!

Special thanks to Mike 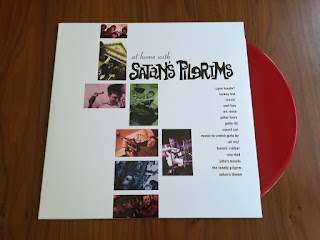 You got a very excellent website, Glad I detected it through yahoo.