Spanish label Snap Records recently released the aptly titled Split LP "Scandinavian Flavor".
The LP features two of the finest bands from Northern Europe's rock'n'roll scene covering old favorites mostly dating from the area 77/83.
On one side, you have Swedish veterans  Psychotic Youth. On the other, you have Denmark's best known one man band, Tommy and the Rockets. Tommy was kind enough to answer a few questions regarding this particular album.

1) For the viewers of this blog What can you tell about this split record with PSYCHOTIC YOUTH? Who came up with the idea? The bands involved or the label?

The initial idea was Jörgen's (singer from Psychotic Youth). He also got the label and the cover artist on board, so all credit goes to him :-)

2) How did you get in touch with Lucy who is singing the Kim Wylde tune "Chequered Love"  with you? Did you actually meet her or was it done remotely?

Geoff Palmer who mixed my side of the split had done some stuff with Lucy, and it was his suggestion to get her to sing on the song. I'm not even sure how her vocals were recorded, but I can only assume she recorded them in London where she lives. Geoff lives in the US, so...

3) Did you record your side of the record at home or did you go to a recording studio?

I recorded everything but the drums here at home. Mike from DeeCracks recorded the drums in a proper studio (Elephantwest Audio) in Austria.

4) After the 2018 record "I Wanna Be Covered", people gonna start to believe that TOMMY and THE ROCKETS are ONLY specialized in covers. What are you answering to that?

Haha yeah, that might be true. I've done a lot of covers lately. I've always been a huge fan of cover songs, and I'm not ashamed to admit it, haha. But don't worry, new original stuff is being worked on as I type this. 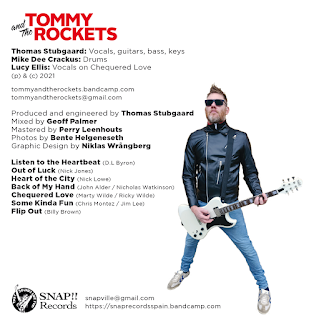 5) Are there any songs left over that you had prepared for this record and did not make it to the record?

None that were mixed, no. I did record some raw demos, but I sorta gave up on them early on. Maybe I'll re-visit them another time. Starry Eyes by The Records, I Found A Love by Phil Seymour, Take It As A Man by The Yankees, just to name a few.

6) What are the plans for 2021 as far as you're  concerned? Are you working on a new album with personal songs?

As I mentioned above, I'm working on a bunch of originals. There's a new full-length in the pipeline and some other releases I can't elaborate on just yet.

7) Do you have a new video on youtube  featuring a track from the split LP??

Just a video with the song itself. I haven't really dipped my toes into the whole "proper" music video production world yet.

8) Are you gonna put a band together and perform this album on the road?

I'd love to! Maybe when the world gets back to normal.

09) Anything you wanna add regarding this particular split album?

Fun fact about all the nationalities involved with the making of this album:

Tommy And The Rockets (Denmark)

hi
do u want to exchange blog links?

my new site is: https://blackwalls2.blogspot.com/

if u decide to add me to your bloglist I will see in my stats and add u to my bloglist..

no probs if u dont want to.
cheers