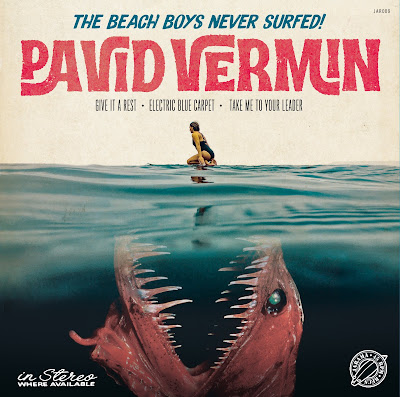 In 2019, Glenn Robinson who had already released a slew of albums under his own name decided to reinvent himself as PAVID VERMIN. Since then, he has released around 40 songs spread across three full-lengths, each heavily influenced by the Ramones.
A while a go, Madrid based Jarama 45RPM Recs. released "The Beach Boys Never Surfed" E.P on a very beautiful coloured vinyl. The title track is one killer of a song and worth alone the price of admission. Time for this blog to talk to the man.
For the viewers of this blog who would not know you, What would you tell about Pavid Vermin to introduce yourself? Is this one man band the new incarnation of you? And what, according to you, makes the big difference between the solo artist Glenn Robinson and Pavid Vermin?

Hey Eric! Thanks for having me! Yes, Pavid Vermin is a fairly new incarnation of myself that I started in early 2019. I really wanted to make home recording a possibility again because it’s how I’ve always worked best. It brought me back to being a teenager in my parents’ basement, recording what seemed like an album a week of absolutely ridiculous punk songs. It lowered the stakes even further, allowing me to impulsively cherry-pick from the conveyer belt of stupid ideas running through my head.

I think there are a few minor differences between my previous albums and a Pavid Vermin album. One of them being the sound quality of the recordings. I knew for sure that whatever I recorded by myself would not hold up against those solo albums, so it was a good excuse to start something new. There is also something comforting about hiding behind a name. I was never comfortable using my real name and I have no desire to put my face on anything. Using a band name almost feels like there is less ownership of what I’m doing and it allows me to be more spontaneous and off-the-cuff, which in retrospect, is a feeling I think was lost on my older albums.

About the newly released e.p.,  what can you tell about the recording process? Was this a "live" in the studio recording or a track by track recording with lots of overdubs?

This is definitely a track by track recording process. I record everything myself in my basement on my computer using very limited resources. I have always been a novice home recording “engineer” (I can’t stress those quotations enough) even though I’ve been doing it for 20 years. I never really learned proper recording techniques or invested in nice equipment. I simply don’t have the attention span to understand it, I find it incredibly tedious and boring. I’d rather be banging out more shitty recordings!

I do think a lot of these songs would sound cool with a few people making a dirty “live” studio recording! I’d like to give that a shot someday when this pandemic chills the fuck out. 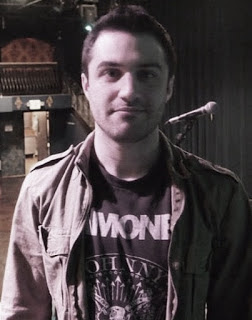 Do you use the nowadays recording technology or do you only work with analog machines in analog studios?

Nowadays recording technology 100% haha. I admittedly have no idea what I’m doing when it comes to recording. I am not an engineer by any stretch of the imagination. My set up will make most people cringe: I use Garageband, a PreSonus interface for guitars and a Blue Snowball USB mic for vocals. I also use a First Act children’s bass that has decade old strings on it. I don’t have any studio monitors. I use these ear buds that came with an at-home sonogram kit that has white noise automatically blasting through them at all times. It’s a very simple problem fix, but I just got used to it. I didn’t really realize how weird that might be until right now! I get a kick out of how much I can get out of so little. None of this should work, but in a weird way, it kinda does.

Who is responsible for this absolutely FABULOUS cover artwork of the E.P.?

That would be the very talented artist, Mario Feal! You should check out his work on Instagram @mariofeal. He was brought on by Bernardo at Jarama 45.

What is your favorite topic/topic that comes easily when you write a new song?

At my core, I like writing about things that can make me laugh. I tend to lean on topics like self-deprecation and the drag of a 9-5 job, but in a pretty irreverent way. I’m not sure what it says about me, but I like making fun of things. I like to look for an absurd angle and embellish the shit out of it. It works out perfectly that this type of music certainly lends itself to be lighthearted and silly because I am not naturally a heart-on-my-sleeve kind of songwriter.

How would you describe Pavid Vermin type of music? Is this still power pop?

I guess it could be considered power pop! If I breakdown my priorities when I’m writing a song, first and foremost is coming up with a catchy hook. I also like to keep intros and verses as short as possible. I try to keep things quick and concise because nobody has time for a four-minute punk song. So, in that sense, I am primarily writing pop music.  I do feel that true power-pop is much more sophisticated than what I write, though. I think in reality, my music fits in with pre-2000s pop-punk, for fans of the Ramones and band that rip off The Ramones.

Do you have a new video on youtube  featuring a track from the new EP??

Yes! Bernardo at Jarama 45RPM put together videos for “The Beach Boys Never Surfed” and “Take Me To Your Leader”. Both have a retro, surf-y, sci-fi feel. My favorite.

Do you intend to take Pavid Vermin on the road one day soon and if this happens what can concert goers expect at a gig of Pavid Vermin? Will you be playing any famous cover songs during the gig?

Something I’ve recently come to terms with is that I don’t have much desire to play many shows. Haha. I’ve struggled with that feeling for years because it’s such a vital part of being a musician. It’s where most musicians thrive! I haven’t been on a stage in four years and I very rarely miss it. The people who were in my old band were all great and are some of my closest life-long friends who were all willing and happy to play my songs. That is something that I appreciate to no end. They’re not the issue at all. I just know I’m not a good band leader, and I don’t like telling people what to do or how to play something. I don’t like being the one to book shows or worry about studio time. That’s not fun for me. I love playing music with my friends, but in a more casual setting.

I understand that’s a super lame response! I’m not saying it’ll NEVER happen, I just don’t see myself seeking it out. It could be fun to do a few one-off shows though. As for famous covers; I used to be in a cover band that mainly played famous 90’s alternative songs and that was fun because the stakes were low, and the turnout was high! Basically, I’d rather be a band member who is along for the ride rather leading the way.

Are there any bands in the USA today you consider yourself close to, musically speaking?

Totally! Without thinking too much, I’d say I’m kinda similar to musicians like Geoff Palmer and Mikey Erg, and bands like Jagger Holly and anything Dan Vapid related. When I started Pavid Vermin, I was very inspired by Outtacontroller, but they’re from Canada, I think…

To what kind of music did you listen to as a teenager? What were your favorite bands as a teenager? Name 3 bands that you consider still have an influence on your own work today.

I found out about punk rock when I was twelve years old. I had already owned albums by Green Day, Rancid and The Ramones for a few years, but I was too young to know exactly what I was listening to. I got heavily into bands like The Dead Milkmen, Descendents and most of the Lookout Records catalog. Aside from punk rock, I was, and still am, really into The Cardigans. I’m still a huge fan of most of the bands I listened to as a teenager and a lot of it shows in my music. I could credit my sound to the likes of any of the bands mentioned above. 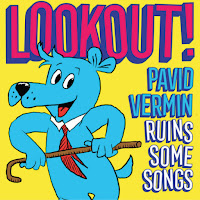 What are the plans for 2021 as far as Pavid Vermin are concerned?

2020 was probably my most productive year for releasing music. I had released two albums (Throw Me in The Trash and Cutting Corners) before the pandemic. Haha! Later in the year I released an album of covers from Lookout Records artists and then “The Beach Boys Never Surfed” 7”. My plan was to keep that momentum going into 2021.

I took a break from recording two albums simultaneously. One is a straight forward Pavid Vermin album and the other is based around song titles I got from a Death Metal Song Title generator I found online. The idea is to write the most intentionally poppy music to a completely awkward, grammatically incorrect song title. The idea is half-baked, but I plan to revisit it someday.

Aside from that I have a few releases on the horizon. My album, Cutting Corners will be released on cassette this May by Memorable Not Honorable Tapes. Then, I have a very limited split 7” with my friend Marc’s new project called Phenotypes that should also be out sometime this Spring. Lastly, I’m featured on two songs with J Prozac for an upcoming 7” coming out later this year!

Anything you wanna add?

Sure! If you’re not interested in my real albums, you should check out my fake albums on Instragram @obscurestvinyl. There’s lots of silliness going on over there. Also, I no longer have access to the Pavid Vermin Facebook page, so pretend that it doesn’t exist. Thanks again for having me!