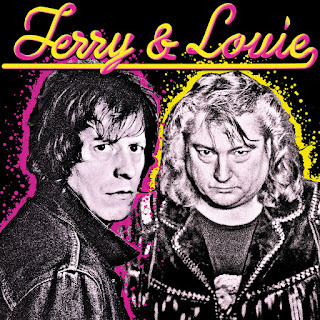 Former Exploding Hearts Terry Six and Louie Bankston reinvent themselves as a songwriting partnership like Nick Lowe and Dave Edmunds of the 21 century. After two and a half years in the making their debut length record entitled "...A Thousand Guitars" is finally out on Tuff Break Records in USA and Bachelor Records in Europe.

The album features 10 absolutely great and highly recommended original tracks penned by Terry and Louie. So it was time for this blog to have a very enlightening talk with Terry.

1) For the viewers of this blog who would not know you, What would you tell about Terry & Louie to introduce yourselves? What are your backgrounds? How long are you guys together as a band?  Who are the other guys in the band (the rhythm section)?

Terry:  Terry & Louie were formally a part of the late Exploding Hearts back in the early 2000's and we are back together as a songwriting duo and partnership. Live, we are a full four piece band as well as in the studio and we've been together since 2013. Apart from myself and Louie, we have Chad Savage (Battleme, Savage Family Band) on bass guitar and Garett Goddard (Personal & The Pizzas, King Tuff) on drums. Aaron Hill (EyeHateGod, Missing Monuments) was our drummer the majority of the time and also played on the album. He recently left to pursue EyeHateGod full time. But, Garett played on the Terry & Louie singles originally so it worked out well to have him back.

2) About the long awaited debut full length record "... A Thousand Guitars",  what can you tell about the recording process? Was this a "live" in the studio recording or a track by track recording with lots of overdubs? 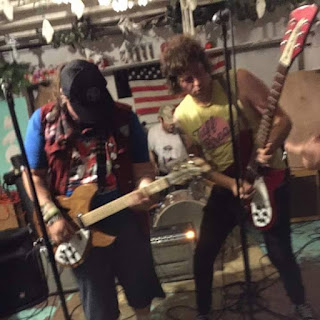 Terry: It was both. We tracked basics live as a band and then came the barrage of guitar overdubs throughout the entirety of the record. There was a lot of technical issues with basics, so I ended up having Aaron come out later on to re cut drums here and there. I also re cut most of the basic guitar parts again. And again...  As well as numerous vocal sessions from Louie and myself. The entire process from basics to final mix down took about 2 1/2 years to complete. I really took my time to make sure each song was getting the attention it needed.

Terry: Both mediums have their purpose. I think either one is fine. Analog and tape definitely sound better and makes sense to me as an operator. And digital is very convenient to work with, especially remotely. What I consider "foolish" is relying too heavily on the digital platform to enhance performances later on in post or the final mix down. Digital changed the game for the better in a lot of ways. This, is not one of them. I'm a performance based artist and engineer. I push myself and others to get it right then and there. That's my biggest problem with music today, in that a lot of bands and artists have this attitude that they don't need to try in the studio. That there is a magical wizard behind the computer to fix all of your off key notes and bad performances. And the final result suffers from greatly from it. It becomes detached and impersonal. Or it just sounds terrible. When I tracked Louie's vocals there were a few moments where he asked me to comp tracks and splice them together or nudge them to "sound good" but I said, "No Louie, do it again." Over and over we did this. And the pay off came when he finally sat down for playback and listened to what he did and was utterly shocked that it was him. He was so happy and proud, he even teared up a few times. That's what I want! Actual emotion. In the days of tape, you HAD to be good. You HAD to push yourself over and over until it was right. I don't think Elvis or Little Richard ever told the engineer to "fix it in post."

4) As far as composing a new song is concerned, how do you guys work? Is one of you writing the lyrics and the other composing the music? Or is everything done together "with 4 hands"? Or do you come each with your own finished songs (words and music)?

Terry: All of the above really. I write both sets of compositions on my own, so does Louie. We've tag teamed songs, riffed off each other, and built songs from the ground up as a four piece unit. Whatever works best for the song.

Terry: It depends. Whatever I'm currently feeling at the moment. For the album "... A Thousand Guitars" it was about heartbreak, loss, isolation, loneliness... but our new stuff we're working on is more storytelling based. I never want to pigeon hole us as songwriters. I think it's important to push boundaries early on so's not to throw a giant curveball at the listeners and then alienate them from us.

6) Terry & Louie is sometimes described as a "songwriting partnership" like Chinn and Chapman or like Nick Lowe and Dave Edmunds. Do you agree with this comparison? Are you proud of it or do you consider there is way more than that?

Terry:  Haha, I was the one that wrote that bit in our one sheet/press kit so I'd say I do! I've always liked the idea of doing a songwriting partnership. And we are both very proud of what we are doing together. We never thought we'd be able to do something like this ever again and it's working out better than I thought.

Terry: Nope. Sorry. Not sure if we're that kinda band yet. Time will tell.

8) What can concert goers expect at a Terry & Louie gig? Are you playing any famous cover songs?

Terry: No. No covers. I've thought about it, and I'm not opposed to it. But none of us live in the same city as each other so we only have a short window of time together for rehearsals before every show, so we just focus on getting what we have in front of us done first. We throw in a few Exploding Hearts songs or a back list song from Louie's repertoire, but that's it. 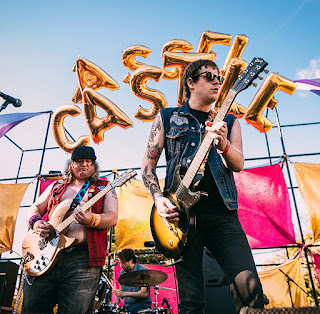 9) Are there any bands in California today you consider yourself close to?

Terry: We all know and like each other well. As I mentioned, we don't all live in the the same city as each other, so we don't play locally or tour constantly and so that bond that develops with other bands in the scene doesn't really apply here. Louie and I, as well as Chad and Garett have toured vigorously before this band, so we've built a lot of very close bonds with bands from everywhere. And it's always nice to see them when we do happen to get out and play.

Terry: I listened to a lot of other music like The Mummies, Thee Headcoats, Motorhead, The Damned, Clash, etc... but I'd say The Ramones were my favorite. They were it for me as a teenager. I'd say Dave Edmunds and Nick Lowe are my main songwriting influences still. It starts there, and all other influences trickle down from it.

Terry: We are playing The Burger Boogaloo at Mosswood Park in Oakland, Ca this summer. And we have hooked up with Otis Tours for a full European tour starting late August through September 2019.

Terry: Check for tour updates, news, and all things Terry & Louie through Tuffbreakrecords.com.  You can get your copy of "... A Thousand Guitars" on the website along with t shirts and more! New releases to come later this year from Touches (Louie's synth project) "Guitar Romantic" Remastered by The Exploding Hearts and a new full length album from Pat Kearns. 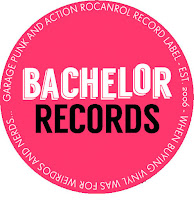