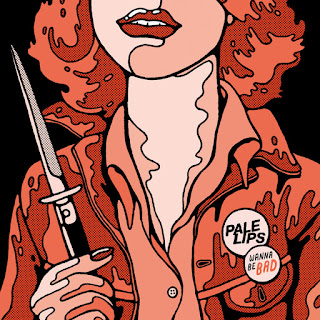 The band's debut album, "Wanna Be Bad" was released last month on Resurrection Records from Spokane, Washington. The CD version is available from Waterslide Records (Japan). Of course this blog wanted to know a little more about these young ladies and yours truly had a nice chat with them:

1) Girls, we would like you to tell the viewers of this blog the full story of The PALE LIPS. The origins of the band, how did you meet, who is playing what, your first release "Got A Sweet Tooth"; We want to hear it all from you!

Lynn started the band in 2013, anxious to hone her drumming skills. Her buddy Jamie played bass, and Ilona joined after some cajoling from Lynn. Our friend and local karaoke queen Jackie Blenkarn was an obvious for a singer! We all bonded instantly and have been having a real hoot ever since!

2) About your full length debut "Wanna Be Bad", can you explain the choice of the title and the choice of artwork? Do you want to be seen as a band that people better not mess around with or is this all pure fun?

The title is a track from side A, and seemed the best fit for an album title. It's all for funzo! We're good bad! The cover was done by our good friend Ken MacLaurin of Ottawa, who's also done album art for the Barreracudas, First Base, a Joneses reissue from Full Breach Kicks Records (RIP), and his own band Mother's Children to name just a few. He's quite prolific, and a greatly talented dude. The illustrations on the insert were drawn by another great talent and friend, tattoo artist Vinny Ramone. 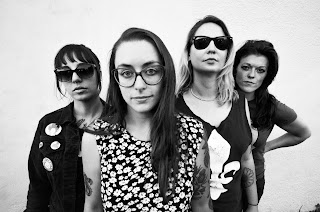 Ilona: I listened to a lot of easily accessible Epitaph and Hellcat records bands as a teenager until one day a Cramps cassette tape changed my life. After that I was able to trace the punk rock lineage back. From the record collection of teenage Ilona, three artist that still influence me would be The Cramps, New York Dolls, and Hasil Adkins.

Jackie: I went through many different phases from my early teenage years through my later ones, listening to everything from skate punk like Millencolin and Screeching Weasel, to emo bands like Saves the Day and The Get Up Kids, to Canadian indie bands like the Constantines and Death From Above 1979, to political punk like Propagandhi and Strike Anywhere. Also a huge Elliott Smith phase. But the only band that I listened to then that I still listen to with any regularity is the Ramones and maybe Nirvana (Bleach is one of my all time favourite records). Also, Fresh Fruit For Rotting Vegetables by the Dead Kennedys was one of the very first LPs I bought and I still love and listen to it regularly. I also liked the Cramps then and now!

Jamie: I used to listen to a lot of Green Day, Rancid and skate punk too! (I secretly still do...)! And now I listen to a lot of different music, from King Tuff, Black Lips and Shannon and the Clams to all my old high school classics. There is definitely a sprinkle of influence from all of them in what we produce!

Lynn: During high school there was a lot of grunge happening so Nirvana was indeed a band I enjoyed and could listen over and over any day and still learn a lot from. My brother was into heavy metal so I have to say I pretty much listened to many styles of music. And hung out with many hippies so I got to listen to all the classic hits. Such as Kinks, CCR and the list can go on.

As for today the bands that influence me a lot today would have to be Vacation, The Spits (wayne's drumming), and definitely can't forget Ramones 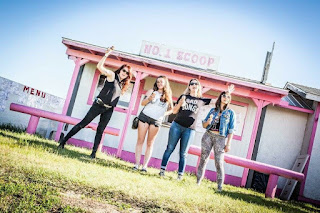 Ilona and Jackie took the reins on most of the compositions on Wanna Be Bad. Moving forward, we are all composing!

5) Is there any video made to promote one of the songs of the albums?

Yes! You can check out videos for Wanna Be Bad and Mary-Lou Sniffin' Glue on the Youtube. We will be premiering a video for Queen of Spades shortly, so stay tuned for that!

6) What can concert goers expect at a PALE LIPS gig? Are you playing any famous cover songs?

7) Is there a new rock'n' roll scene in Montreal with JONESY and you and maybe some other bands?

There is a lil' rock n' roll scene here now, and it rules! We have the pleasure of being surrounded by SO MANY talented people and bands. Bands like Dany Laj and the Looks and Les Deuxluxes are definitely worth mentioning in the city at the moment!

8) What are the plans for 2017? Are the PALE LIPS coming over to Europe soon?

why, yes! We are coming to Europe in May and June of 2017. No details yet but you can expect to see our mugs in Spain, Germany and Italy.

9) Anything you want to add?

Thanks, eh?! And y'all can expect our next EP "Should've Known Better" out in early 2017 from the lovely folks at Surfin' Ki and Resurrection Records. We are really stoked on the songs and the artwork for this one... we can't wait to share it with you!