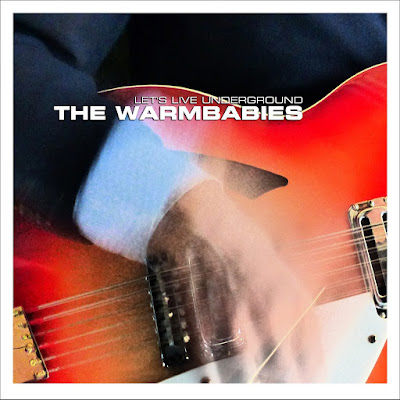 Can you judge a record by its sleeve? Hard to tell. But at least it should give you a clue to the type of music a band is playing. Putting the picture of a vintage Fireglo Rickenbaker 330 is a pretty strong statement in itself. Considering Paul Weller, Tom Petty or John L., to name a few, all played one, this should already give you a serious hint.
Putting a TWELVE strings Rickenbaker 330 is an even bigger statement. The doubt is no longer allowed and you know exactly what you are in for: 60's influenced rock'n'roll with a good dose of 70's power pop thrown in for good measure.
The WARMBABIES, all veterans of the rock'n'roll scene of the French Riviera, sure know how to write good tunes with a really punchy rhythm section, sizzling guitars and perfect vocals to match. This LP is full of soon to be classic Power Pop songs. Very Highly Recommended !
1) For the viewers of this blog who would not know you, What would you tell about The WARMBABIES to introduce yourselves? How long are you guys together as a band? Who is playing what instrument in the band nowadays? What are your various individual backgrounds?

Serge : We are a quartet of "classic" rock and we live in Nice, at the french Riviera. The Warmbabies, in the present form, exists for about 5 years. With Marc Galliani on guitar and lead vocals, Olivier "Bratch" Nemejanski on guitar, Serge Ceccanti on bass and Daniel Aprosio on drums. As far as our various individual backgrounds, we would only mention one : The Bratchmen. 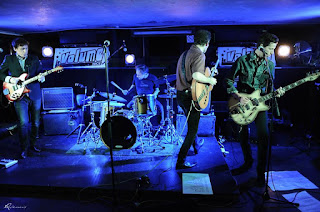 2) About the full length record "Let's Live Underground", can you explain the choice of this title? What can you tell about the recording process? Was this a "live" in the studio recording or a track by track recording with lots of overdubs?

Marc : "Let’s live underground" is one of the first song from "Bratch", that we rearranged for my voice. A starting point. Rehearsals and concerts were so far apart that we couldn't show ourselves as a band. We were an Underground band, by force of circumstance.

Serge : The title of the album was suggested by the graphic designer. A good idea that was unanimously accepted! The recording of the album was disturbed by the first pandemic but in the end, it gave us a lot of time to refine some titles. Bass, Drums and Rhythm guitars were recorded live, all the rest was a re-recording.

Serge : Our choice went to a digital studio. But all the instruments and amp we used are analog! All the guitars and basses used on this disc are vintage gear over 50 years old! We are simply fascinated by the beauty and the sound of these old instruments.

Marc : Everybody is involved. This album would not have been possible without one of us. The material on  this record is made out of old songs from "Bratch" and Marc. The next record will contain more of Serge songs.

Marc : The pop format we like for this project fits better with stupid love songs. Someone said , The more stupid they are the truer they are…

Serge : Love, birds and the sun ! But the next songs will be darker : Lost love, frozen birds and rain !

Serge : We are clearly influenced by the rock 60's. But not only... I will quote three groups : Plimsouls, Fleshtones and Teenage Fanclub, But there are many others.

7) Do you have a new video on youtube featuring a track from the latest full length?

Marc : We have no money left for video, so we are pirating images for our songs. We are going to do something …Serge : No money, no time, finally is it really useful ?

8) What can concert goers expect at a gig of The WARMBABIES? Are you playing any famous cover songs during the gig?

Marc : We used to play Kinks, Big star, Plimsouls, but mainly our songs.

Serge : We like to integrate a few covers in our concerts, just for pleasure.

9) Are there any bands in France you consider yourself close to? musically speaking?

10) How would You describe the music you're playing? Is this POWERPOP or do you consider there is way more than that?

Serge : Our music is impregnated with the music we love. A mix of power pop / 60's rock / garage rock, no doubt.

Marc : We are doing our stuff with our influences, we would be happy to be classified in power pop but that was not planned at all.

11) What are the plans for 2022 as far as The WARMBABIES are concerned?

Marc : We would like to play festivals or nice venues, specially abroad, Belgium, Spain, North of France. With the covid situation we just don’t think about it. But we are affordable for private request as well.

Serge : We work hard on new songs. Our goal is to compose the ultimate pop song ! Recording in autumn, hope.

Serge : Recording an album for a band like us is always a "small adventure" hazardous, with lots of problems to solve. We have completed this mission and we are very proud of the result ! 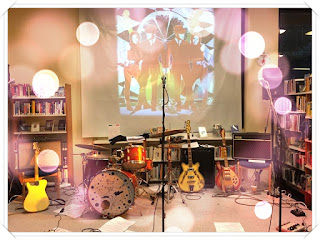 Hey Viewers, don't go away......While you are at it, check out this other band hailing from the French Riviera, and one that includes some of the members of the WARMBABIES, or is it the other way around: THE BRATCHMEN.
The cover here is a little more misleading, I give you that. Judging by the cover you would have every right to expect some French FLESHTONES.
Well, not at all, here we are closer to the Everly Brothers or the early HOLLIES but all the tracks are very neatly performed and the whole record is really enjoyable. You  should definitely give it a try.
The record comes in a beautiful gatefold sleeve!
Get it here: https://avethesound.bandcamp.com/album/easy-sound-of-av046-lp-gatefold 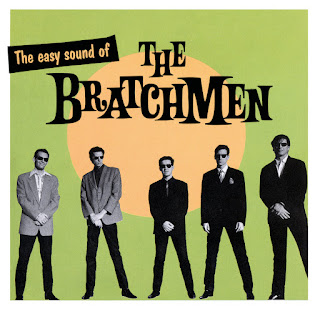