A couple of months ago, the German label Screaming Apple release the brilliant debut solo full length record of Brent Seavers. Brent is best know for being the bass player in the Californian outfit The Decibels.
When the pandemic started, Brent decided to record some of his original songs and ended with a full album on his hands. Obviously there is some very DECIBELS-like material here, but going solo has allowed Brent to drift a bit forward in time, from mid-60's pop right up into the 70's and early 80's power-pop scene.
Brent Seavers channels his own brand of modish guitar, the pop sensibility and DIY appeal of early dB's, the mod-era WHO with a pinch of the JAM, but squeezed through his own filter that gives them his own sound. This is a real must buy!
1) For the viewers of this blog who would not know you, what would you tell about you and your musical background to introduce yourself?

I grew up in a musical home and have been playing and writing music since a very early age. As a young kid, I loved watching the Beatles cartoons and Monkees episodes. I got my first guitar when I was 11, a drum set a few months later, and then traded my Star Wars toys for a 4-track tape recorder so I could start recording my own music. I started a few bands that played a few live shows but never released any recordings. I joined The Decibels in my teens as bass player and contributing song writer and have been enjoying every moment. They’re a solid group of musicians and great friends. 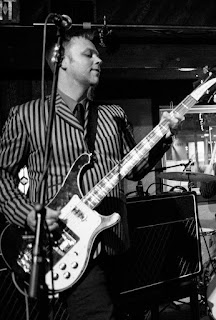 2) If I'm not mistaking "BS Stands For" is your debut full length solo records. Since 1997, with your brother Dean, you are 1/4 of the Decibels. What decided to release a solo album now?

The solo album was pandemic-fueled. Being stuck at home in my studio with too much time initially compelled me to make a handful of music videos documenting the recording process and to keep my sanity (https://www.youtube.com/brentseavers). After almost a year of that, I decided to record my own original music. There wasn’t initially a plan to release the recordings on any label. But after recording plenty of songs, I realized that I could.

3) About this debut full length solo record, what can you tell about the recording process?

I’d sit down at the drum set, and record myself playing one of my songs. Then, I’d hit rewind, start the song again, and add the guitars, bass, vocals, keyboards, and whatever else the song needed. With the exception of a few hand claps contributed reluctantly by one of my kids, if you hear it on the record it’s me.

4) Do you use the nowadays digital recording technology or do you only work with analog machines in analog studios?

I started recording music in an analog world and appreciate the process. I keep everything analog – tube driven, real instruments – up until the final step where I used to record directly to tape. At that point now, I record the audio digitally. There are rare moments where I record a track directly to tape and then transfer to digital, but not often. But I am very picky with my mic and tube-pre amp selections – pairing mics and amps with specific instruments - always chasing a specific sound.

5) Are the songs on this record specifically composed for the purpose of this solo effort or are these songs you have composed over the years and deemed not fit to make it to a The Decibels record?

Half of the songs predate the Decibels and were part of the reason I was asked to join the group. The other half were written during my time with the Decibels – Flatline being the most recent. Usually I’d bring a handful of songs to the group at practice, and we’d try them all out. The ones that clicked the easiest made it onto a Decibels album. I don’t think the group every said “no” to any of my songs. But since we had 3 contributing song writers in the group, not every good song made it onto an album. Both Dean and Joe have an extensive back catalogue of original songs as well. 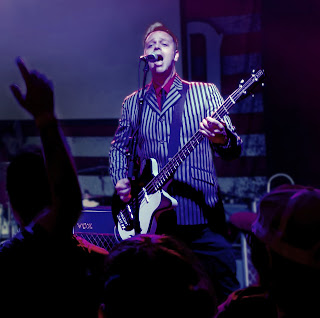 6) What is your favorite topic/topic that comes easily when you write the lyrics to a new song?

I like writing about the honest moments in life. Falling in and out of love happens to all of us, but so does self-doubt and failure and pain and innocent infatuation. I never set out to write a serious or a silly song. I write about whatever is happening to me in that moment. Sometimes it’s love. But sometimes its maniacal laughter inspired by the insanity of living. I love when lyrics are honest even if they’re silly. Life is silly.

7) Does your solo album mean that the Decibels are now on an indefinite hiatus?

Not at all! The Decibels are alive and kicking and wrapping up our next album. And honestly, it’s one of my favorites. Every member of the Decibels has life outside of music – which is a good thing else we’d lose our inspirations. And we each take time to live every aspect of our lives properly. No neglected hobbies or children in this bunch! 😊 So, album releases and live shows will happen less frequently, but only because we’re enjoying each aspect of our multifaceted lives.

8) Do you have a new video on YouTube featuring a track from the new LP??

When I recorded my original music, I didn’t film the recording process like I did on all those cover tunes music videos on my YouTube channel. So, the short answer is, not at the moment.It’s sometimes hard to give your best musical performance when you’re also the sound engineer, producer, camera operator and director. While it was alright for the musical performance quality to suffer a little for those cover tunes music videos, for my original tunes I didn’t want the music to be anything less than my best. But it could still happen. 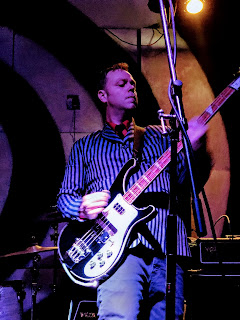 I have been performing my original songs with a band here in California to help promote the album release, and would like to take the band on the road as more venues open up. My main focus is on original music for album releases, but I do have plans to make some more cover music videos in the near future.

10) Are there any bands in The USA today you consider yourself close to, musically speaking?

There are so many great power pop and pop rock bands in the USA that it would be near impossible to name them all. I definitely feel a connection to many local California groups that I saw as a kid - like The Odd Numbers and The Hi-Fives to name only two – who were a huge influence on my early music.

11) To what kind of music did you listen to as a teenager? What were your favorite bands as a teenager? Name 3 bands that you consider still have an influence on your own work today.

As a teenager I listened to The Beatles, The Monkees, The Kinks, Herman’s Hermits, Buddy Holly, The Everly Brothers, The Rolling Stones, The Ramones, The Jam, Nirvana, Green Day, Letters to Cleo, The Muffs, The Romantics, The Knack, The Smithereens, The Plimsouls, The Beat – pretty much early rock ‘n’ roll 1955-1965 and late 70s to early 80s power pop and punk.

I always thought that The Beatles, The Monkees, and The Jam were probably my biggest influences on what I write, but it seems that when I create songs they sound nothing like those groups. So, who knows?

I’m about 6 songs into the next solo album, but have been focusing on finishing up mixing and mastering the Decibels next album. For me, The Decibels are my main focus. But I will continue writing, recording, and performing my solo music in-between Decibels projects wherever I find the time. It’s something that makes me happy.

Sure, why not. If you’re a talented musician who is frustrated because you haven’t been signed to a major record label, stop it. Take a look at some of the artists currently on major labels. They sign just as much talent as total garbage. Don’t let such poor judges determine if your music has value. Make your music. Keep it honest. Discerning people are listening. What you do matters.