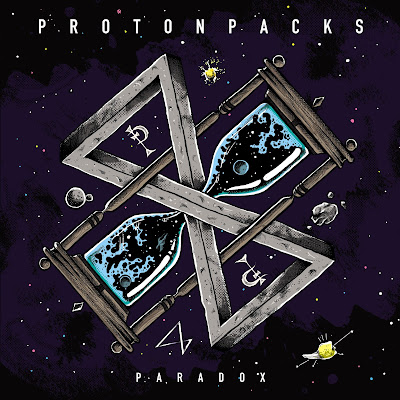 1) For the viewers of this blog who would not know you, What would you tell about Proton Packs to introduce yourselves? How long are you guys together as a band? Who is playing what instrument in the band nowadays?

We're an Ecto-Punk band from Tuscany, Italy. Matt and Alex live in Siena while Brodie and El Leon Blanco live in Arezzo. Ecto-Punk means punk rock with a sci-fi vibe. We've been together for 16 years, now.

Matt and Alex play drums and guitar respectively and are there since the beginning. Brodie was the next to join, around 15 years ago. He plays lead guitar and sings. El Leon Blanco joined around the time we were writing Space Opera (our second album) and we haven't changed line-up since then.

Matt used to sing most songs in the early days but now Brodie does lead vocals on all of 'em 'cause he kicks ass and we didn't like the "two singers" approach too much to begin with. 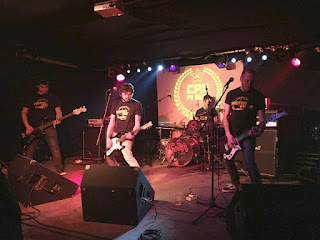 2) About the latest full length record "Paradox", what can you tell about the recording process? Was this a "live" in the studio recording or a track by track recording with lots of overdubs?

We always record all the rhythm tracks (drums, bass and rhythm guitars) together in the same room at the same time with headphones and all the amps in separate booths. It works for us because, if you're prepared, it saves time and adds to a more natural flow of the songs. After that, we record guitar leads and licks and then vocals. Once the bulk of the recording is done we add a few effects, percussions or little synth or keyboard parts if the songs require that. We don't really do overdubs but just minor edits if a take is otherwise good and we just need to fix some small thing.

The last three albums were all recorded digitally but through a huge 32-channel '96 Soundcraft DC2000 analog mixer. We think for our kind of punk rock, digital recording works just fine, as long as you don't indulge in over-editing or tampering.

What really makes the difference is the way you play your instrument. In punk rock you don't need to be a virtuoso, you just need to go in the studio well prepared for the songs with the right kind of muscle-memory.

Plus digital recording is quicker and cheaper, if you do it right. We wanna give a shout to Freddy from the Leeches, who is our producer and works at New Mood recording studio! He's the best!

We all write songs and then we cherry-pick the best of the batch. Sometimes we write separately at home, sometimes we write all together during practice. The arrangements are all done collectively.

That's when we add maybe a muted-guitar part, a break or change the song structure. On Paradox probably 60% of the songs are Brodie's and the rest is by the other guys. 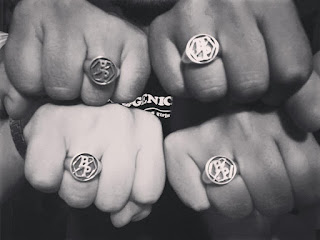 Normally it will be something about sci-fi, hard boiled/espionage or horror, to a lesser extent. The idea might come from a novel, a movie or sometimes even from a wordplay but, even when we get inspired from another work, we always try to put our own spin in it and take it someplace else. Song titles are very important for us: if we have a good title, we probably can scramble together a decent enough tune.

If we had to name just 3 bands, it would probably be Ramones, Misfits and Screeching Weasel. They're the bands that the four of us will always love. It's really hard to play in a punk rock band and not be influenced by these giants.

We actually have 2! One is for "Man With the Eyepatch" and the other is for "Retrofuture". They were both done by Richard Sliw Deagen Frith from Laughin' Jula's Record Reviews! He's great!

8) What can concert goers expect at a gig of Proton Packs? Are you playing any famous cover songs?

We try to keep it short and sweet with little to no stage banter between songs. We usually play the more recent stuff we put out 'cause we like to think it's better than the older songs, ha! We don't play too many covers, but we might throw in the occasional Screeching Weasel or Lillingtons hit from time to time!

9) Are there any bands in world today you consider yourself close to? 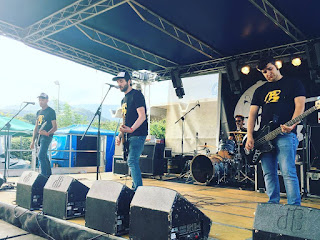 We're constantly writing new songs and we're hopefully gonna do one or two splits with a couple of great bands. Let's keep our fingers crossed!

If you wanna make good albums, throw away 75% of the songs you write!