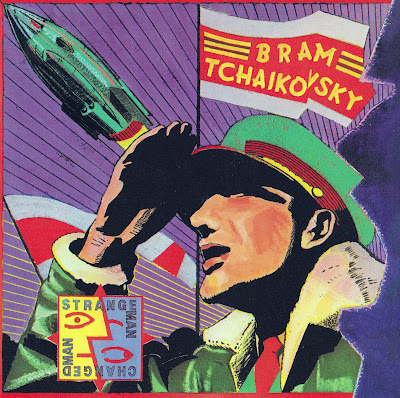 Bram Tchaikovsky (Peter Bramall) left the Motors to form his own band, releasing this great debut album in 1979. "Girl Of My Dreams" was the hit, but just about every track is wonderful. Aside from the hit, other outstanding tracks include "Lady From The USA", "I'm The One That's Leaving", "Lonely Dancer", my personal favorite "Sarah Smiles", and the title track. This is one of the great albums from the heyday of power pop. The mix of upbeat and slower tunes is especially effective. After this, Bram made 2 more albums but with his commercial fortunes falling he retired from the music biz, and as far as I know he hasn't been heard from since. This CD is apparently out of print and selling for insane prices!

Thanks for this. Great to have a digital copy. Back in the day my band covered "Girl Of My Dreams". Another favorite was "Turning Japanese" by The Vapors. If memory serves both were getting some airplay at the same time.

I love this LP, but my fave Bram song is called "Let's Dance" on an record alternatively known as "Pressure" or "The Russians Are Coming". Thanks for this one!

The remastered CD is still available for purchase through the Heavy Metal Kids website .

I don't get it I fill in the code hit enter choose how I wish to download only to be told file not found.

Any chance you could re-post Bram as well as "The Greatest Hits" on another service as I can't get anything off of netkups even though i'm a registered user.

The CD did go out of print, but you can still buy a version that was put together by Bram Tchaikovsky drummer Keith Boyce. It is for sale on the Heavy Metal Kids' website. (Boyce joined the HMK's after Bram T broke up, and it was Ronnie Thomas from HMK who wrote "Girl of My Dreams"). I bought a copy from the HMK online store and asked Keith Boyce by email what happened to Peter Bramall, but Mr. Boyce had no idea of his former bandleader's whereabouts.

The tracks added to this version of SMCM are: Amelia/ Lullaby Of Broadway/ (Who Wants To Be A Criminal/ Robber (Live)/ Whisky & Wine (Live)/ Come Back/ Rock 'N' Roll Cabaret/ Sarah Smiles/ Bloodline/ Turn On The Light.

Also, in 2012 a short live set appeared for sale on the official BT Facebook page (as well as Amazon, iTunes, and Bandcamp). "Live At The Lochem Festival 1979" includes Sarah Smiles, Robber, Nobody Knows, Turn on the Light. and Girl of My Dreams. Here are those live songs plus the above-listed bonus tracks: http://www41.zippyshare.com/v/ul4ngIDh/file.html

The blog Power Pop Criminals shared a decent quality FM broadcast of a 1979 show in Boston, which includes covers of "Jailhouse Rock" and some fantastic guitar work on "Red House" by Peter Bramall (not Brumell -- otherwise the band would have been called Brum Tchaikovsky!) The show was reposted last year on the Voodoo Wagon blog. The link is still good, and the password is fbsvw. http://voodoowagon.blogspot.com/2014/08/bram-tciakovsky-paradise-theater-boston.html#comment-form

Top !!
Thank you very much.

You'll be happy to know that this album as well as Bram's other 2, are back in print in a specially priced set as of 2018. Amazon carries it. My copy from the UK just showed up.