Faz Waltz - On The Ball

When I first heard the single "Hot Cold Fever" I must admit that I was a bit confused -to say the least. As a musician myself, I totally understand that, at one point, every band is entitled to make a change in its musical style. But in this case the change was RADICAL.

What the hell happened to FAZ WALTZ that everybody loved for their take on BOVVER rock? It was almost like, in the early seventies, SLADE had morphed overnight into Crazy Cavan and the Rhythm Rockers.

Nevertheless, now that the full length "On the Ball" is out everything seems to make more sense. After all, it's only rock'n'roll and as long as the songs are good everything is fine. And Faz knows how to write great songs! So why complain? 1) This radical change in sound and in look, is this something that happened during the pandemic or is it something you had in mind since a long time.

Faz La Rocca: It's something that came naturally, always loved the roots of Rock'N'Roll and it shows in many other songs during the years: "Shakin' Like An Hooligan", "Millionaire", "Last Train To Nowhere" and others.

2) Aren't you afraid to lose the old FAZ WALTZ fans? Why have you not tried this new musical style under a different band name?

Faz: No, I'm not afraid of losing old fans... I've never wrote my music to please somebody else, I write for my pleasure and for what I feel. I think fans should follow the musical evolution of the artist, not the opposite. In eight albums I see a progression in many ways, but basically it's always been Rock'N'Roll. Why should I play my music under a different name? This is me.

3) what can you tell about the recording process? Was this a "live" in the studio recording or a track by track recording with lots of overdubs? Did you overdub the piano parts yourself?

Faz:  We recorded the rhythm section first (drums / bass) playing all together, then I've added guitars, piano, vocals and percussions. Yes I've played all the piano parts on this album. 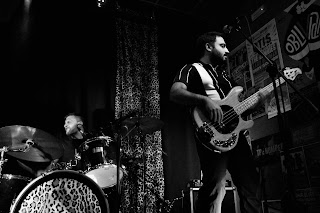 4) For this new album did you use the nowadays recording technology or did you only work with
analog machines to reproduce the 50's sound?

Faz: We used both technologies, old and new. Anyway we love working in studio, not at home like many do today. Thanks to Brown Bracella, who always produce the records with me, we can use 50s/60s microphones and preamps, of course going through a real vintage mixer.

5) During concerts are you going to keep playing old numbers and mix them in the set with the new ones or will it be a total new set focused on the new album?

Faz: Yes, we're playing many songs of the new album but we always add some from the old repertoire.

6) When it comes the rock'n'roll pioneers of the 50's who are your main heros? I, for one, hear a lot of Eddie Cochran and Little Richard influences in this new record. 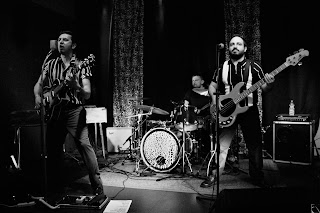 Faz: Well, I've always been a big fan of 50s Rock'N'Roll, I think my favourite are Little Richard, Jerry Lee Lewis, Chuck Berry, Elvis Presley, Eddie Cochran, Buddy HOlly and... John Lennon. Yes, I consider him one of them, a real rocker.

7) On every FAZ WALTZ there is a John Lennon's tribute. On this one, it's "Shining Teeth". Can we expect a full "Lennon" album one day ?

8) Do you have a video on youtube featuring a track from the latest release?

9) What are the plans for the rest of 2022 as far as FAZ WALTZ is concerned? Are you guys planning to tour Europe to promote the album?