The Yum Yums - For Those About to Pop 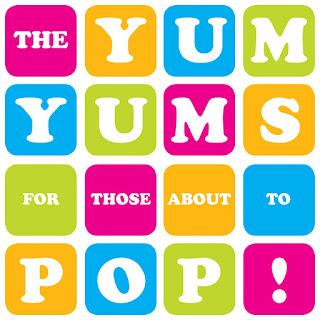 Since the release of their first single "Girls Like That", in 1994, The Yums Yums have always been a band dear to my Powerpoppers' heart. 6 years in the making, but finally here is their latest release, the aptly titled "For Those About To Pop!" And it was certainly worth the wait because this is probably their best offering so far.

It's got everything one loves so much about the Yum-Yums: instant vocal melodies, powerful playing, bubblegum backing vocals, hooks a plenty and endless stories about girls, girls and girls.

There are many versions of this new album but this blog choose the Japanese version released on WATERSLIDE Records.

Today Morten Henriksen is the only remaining member of the Yums-Yums yours truly witnessed at the Pit's way back in the day. So it was a pleasure for this blog to have the opportunity to interview him. Here it goes:

1) For the viewers of this blog who would not know you, What would you tell about The YUM YUMS to introduce yourselves? What was your musical background? Who is playing what instrument in the band nowadays?

Well. The Yum Yums are a power pop / pop punk band from Norway, who has been around since 1993. We have released 5 albums, a 10’’ mini album and a bunch of singles and toured all around the world! 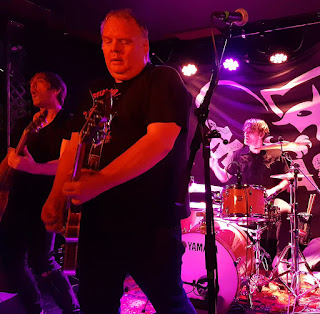 2) One quick look at the names of the people who played on "Girls like that" and the ones who play these days on "For Those About to Pop" and it is obvious those are totally different musicians. So are YOU the Yum-Yums? Could you play the same music with anybody filling in on bass, drums and 2nd guitar?

Ha ha… yes, I think we can say that I am The Yum Yums as I am the only member of the band from the start, plus I am the songwriter and singer of the band. We have had lots of lineup changes, but the sound of the band seem to be consistent. We actually just got a new bass player, a good addition to the band! A good back-up singer, too!

3) Usually the voice of a singer tends to get deeper and deeper in tones with the age. Iggy Pop is a fine example, he started out, ....well like Iggy... and now he has the voice of a Baritone. So my question is: From one grandpa to another, how do you manage at your venerable age to still have the voice of a 16 years old teenager?

I don’t really know. I haven’t done anything to keep it this way. I didn’t start singing before I was 30, so the voice wasn’t worn out already. That may have something to do with it. I write songs that don’t need a graspy rock’n’roll voice. Nice pop songs do the trick! I remember, at a very early age, that I would never be Noddy Holder (Slade) or Paul Stanley (Kiss), anyway. 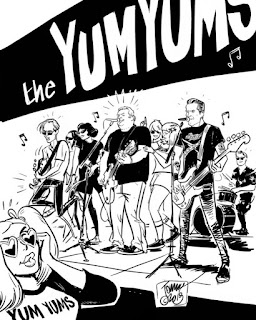 4) About the newly released full length record "For Those About to Pop",  what can you tell about the recording process? Was this a "live" in the studio recording or a track by track recording with lots of overdubs?

We actually spent 6 years writing songs and recording them. It was when the Covid thing hit in the middle of march, I found time to draw the line and finish the album… We really had too many songs to choose from, but I am really happy with the choices we made. A little bit of pop punk, a little bit of standard pop, a little bit of glam rock and hints of doo wop and surf music thrown in. I think it’s our best album so far! So, we sent the files to our mixer, who also suddenly had time to mix. Luckily Perry Travolta also had time to master it!

Usually we record the drums in a real recording studio, with click-track demos. The guitars we did in our practice place. The bass, vocals and percussion I did at home, on my mac! I have to give it to our mixing guy Christian Jacobsen, who did a fantastic job! He is also my son in law, and helps out on keyboard!

5) Do you use the nowadays digital recording technology or do you only work with analog machines in analog studios?

Being a Mac guy, I LOVE recording digitally! I like being in control of the process! I got to have real drums and real guitar amps, though.

6) To what kind of music did you listen to as teenagers? What were your favorite bands as a teenager? Name 3 bands that you consider still have an influence on your own work today? 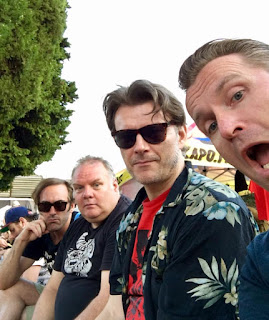 I can name one. The Ramones!!! Well, actually the whole punk rock movement were a huge influence, and so were the late 70’s power pop bands. I also have to mention the glam/glitter wave of the early 70’s, who I still listen to and steal ideas from! Oh… and 60’s bubblegum, of course!

7) What is your favorite topic/topic that comes easily when you write a new song?

I’ll give you one guess…

8) If I were to describe The YUM YUMS as a "power pop band with a lot of power and a little bit of bubblegum pop", would you agree with this description? Would you be proud of it or do you consider there is way more than that?

It’s a pretty good description, and I would be proud to claim that. There is more though. I get inspired by all kinds of music with good melodies. Standard pop, vocal surf, girl groups, doo wop… and more!

9) Do you have a new video on youtube featuring a track from the LP??

No, we don’t… The Covid situation put a stop to that, but we’re looking into it! We absolutely should make something.

In the meantime, here is some live footage at Punk Rock Raduno 4

10) What can concert goers expect at a The YUM YUMS gig? Are you playing any famous cover songs during the concert?

It’s hard for me to say what to expect. A good time, I guess! We always do some covers, especially some from our early recordings. Out Of Luck, Chewy Chewy, Valerie, Wig Wam Bam, All Kindsa Girls, Walking Out On Love, We Just Wanna Dance, Rush Hour… We have too many originals to focus on, these days. And a new album doesn’t make it easier… but we may surprise you…

11) Are there any bands around the world today you consider yourself close to musically speaking?

Yes, quite a few… musically and personal… Psychotic Youth, The Queers, Chixdiggit, Dan Vapid, Kurt Baker Combo / Band, Tommy and The Rockets; The Spazzys  / Lucy and The Rats; Geoff Palmer; Suzy and Los Quattro and many more!

An old dream is to play Belgium’s Sjock Festival. Maybe next year? Due to the already mentioned Covid situation, we’re not getting our hopes up for this year. I guess we’ll just keep on writing songs and release new records! Hopefully it won’t be 6 years until the next album. Famous last words ha ha…

Caroline and The Treats are back! Look out for a new album this year!


CDs are also available on:
Rum Bar Records in the USA
House Of Rock Records in Norway / Europe
And the LP is released on Screaming Apple Records in Germany

Thanks for this feature. I was so thrilled to realize there's
a new Yum Yums album that I went straight to Amazon and
purchased the digital version. I'm downloading it now!