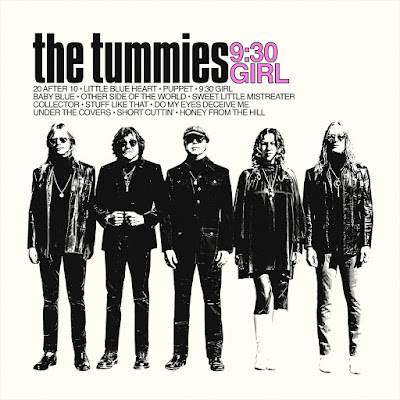 The Tummies is a five piece rock'n'roll band hailing from Nashville, Tennessee, whose members have toured and /or recorded with people as different as Peter Wolf, Ace Frehley & Gene Simmons of KISS, Joan Jett, Cyndi Lauper, David Lee Murphy or Rodney Atkins.

Their debut full length record, "9.30 Girl", mixed and produced by Caleb Sherman, is featuring some of the finest 60's influenced pop songs. And they even had one of their tracks featured on the SHAMELESS TV Show.

Time for this blog to talk to bass player and vocalist Judd Fuller. 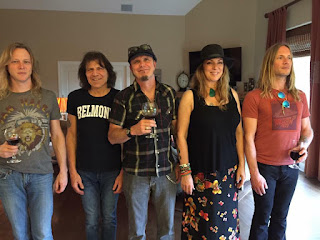 1) For the viewers of this blog who would not know you, What would you tell about The Tummies  to introduce yourselves? How long are you guys together as a band?  Who is playing what instrument nowadays?

My wife Dana and I started writing these powerpop / Beatlesque tunes just for the sheer joy of it…a nice change from writing the usual Nashville “formula” country songs. Many of the songs took about five minutes to write! We had compiled so many songs, and we were having so much fun doing it, we decided we had to get a band together and play out live. There was only one line-up we had in mind, and that was our dear friends Philip Shouse & Jeremy Asbrock on guitars, and Sandy Gennaro on drums. I play bass, and Dana and I both sing lead vocals. We “recruited” these guys because we all share a love of Mersey Beat Britpop, The Beatles, etc., and are all musically influenced by that style. These guys know this style like the back of their hand. There was no other choice for players! Plus we love them as people. The seeds were planted about six years ago, and though we played live shows, it took us a while to get in the studio to complete our first record. This was because we are all on the road with other bands as our “day jobs”, so sometimes time is at a premium. You can find all our resumes on thetummies.com, but here’s a list of acts we’ve all toured / recorded with or are currently touring with (when the world gets back to normal!): The Monkees, Gene Simmons from KISS, Ace Frehley from KISS, Accept, Bo Diddley, Joan Jett, Pat Travers, Peter Wolf from The J. Geils Band, Carly Simon, Maggie Rose, Rodney Atkins; the list goes on! So not only are the band a great bunch of folks, but I like to think we have some serious pedigree, hahaha! 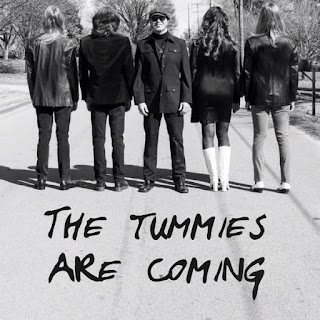 2) About the latest released full length record "9:30 Girl",  what can you tell about the recording process? Was this a "live" in the studio recording or a track by track recording with lots of overdubs?

As far as the recording of “9:30 Girl” went, we all play down the tracks live in the studio, with Dana and I doing “scratch” (reference) vocals to map out the arrangement. Minimal guitar overdubs, as we like to have that “live” feel. Part of the fun is that we go into the studio unrehearsed! We just send the guys work tapes that we record on my iPhone, just singing and playing acoustic guitar. This gets everyone’s wheels turning regarding creativity. We hand them a blank slate, basically, and there is minimal production or directing….these guys are so in tune that they “get” what we are looking for in the songs, and come up with really cool parts and ideas for the song! So it’s a fun, exciting, at times beleaguering, process….and it makes for a fresh, exciting product in my opinion! Sandy will add some extra percussion to the tracks such as tambourine, shaker, etc…then Dana and I will go in and overdub the final vocals, singing together “live” to the tracks…but even the vocal ideas are a work in progress right up to the finishing line! It’s a blast.

We do use more modern technology for recording….but our engineer / producer Caleb Sherman of Cygnus Sound Studio here in Nashville is a wizard. Also because it’s less expensive. We are all involved in groups that have labels, management, etc., but because The Tummies are independent we do have to keep an eye on the wallet. We’ve gotten a lot of great feedback on Caleb’s production! If it were up to me, I’d want to produce an almost “slavish” imitation of the 60s vintage sound, but Caleb talked us out of it, and he was right. He believes there should be a touch of modern pop in our “vintage” style songs. So we like to think it’s a balance between old and new. We like his approach.

Dana and myself write all the songs. The boys help with arrangements of already written songs; and as I mentioned earlier, they always come up with great ideas! 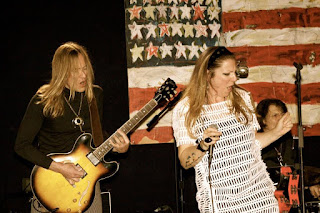 This is a fun question! Anything and everything can trigger a song idea. For instance, “9:30 Girl” came about because I remarked to my wife Dana how she consistently wakes up every morning at 9:30. She replied, “yup, I’m a 9:30 Girl”! I grabbed the guitar, the song was written within a half-hour. The song “Other Side Of The World” happened because Dana and I were having some wine on our back porch one warm, beautiful, breeze-less summer night, and she remarked, “look how still the night is, baby…” I grabbed the guitar, the song was written within a half-hour! “20 After 10” happened because one night we were hanging out, a little too buzzed on wine, and Dana said, “It’s 20 after 10! We must go to bed!” Do you sense a theme? Hahaha. So it could be a word, a sentence, the sound of a car horn; anything. Our antennae are always up and looking for song ideas!

6) The Tummies are sometimes described as a 60's influenced band. Do you agree with this? Are you proud of it or do you consider there is way more than that?

We DO agree with this assessment. And are proud of it. After all, this is the music that influenced all of our young lives. I think what naturally happens, though, is that inevitably the songs will carry our own unique stamp on them. We have all played with so many musicians, and so many different styles, I like to think that helps weave all the ideas into something fairly unique, and not just carbon-copying the 60s style.

Yes, we have two videos out on YouTube! You can find all the links on thetummies.com More videos coming soon!

8) What can concert goers expect at a gig of The Tummies? Are you playing any famous cover songs during the gig?

Concert goers can expect a fun night of Rock ’N Roll, and some pretty darn good musicianship as well! And a touch of humor. Music IS fun, right? We have not played any cover songs yet….we do have one in mind, but I don’t wanna give that away yet (wink, wink). 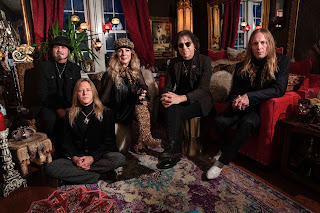 Honestly we haven’t heard one yet from the USA…but that could also be a function of the fact that we all play with so many other folks, that if we’re not working on Tummies tunes, we are learning songs from other artists to play on their gigs! So our ears and practice time are usually full getting to work. Good question, though. When I get a break from being busy, I’m gonna see what’s out there!

Obviously, The Beatles! That was both mine and Dana’s favorite band as kids. But also The Rolling Stones, Led Zeppelin…even stuff as far afield as Bob Marley, Little Feat, The Grateful Dead, Judas Priest, etc…we all listened to such a variety of stuff, it’s hard to pin down! But regarding The Tummies, specifically, the biggest influences are The Beatles, and even The Monkees. And again, while we wear those influences proudly, I like to think we don’t simply “imitate” them!

We are trying to figure out everyone’s tour schedule with our other bands, as the world gradually opens up….we’ll probably start by playing an album release gig / party here in Nashville, and take it from there. We would LOVE to tour Europe. Got any connections over there? ;) :)

Great stuff! I saw Jeremy Asbrock is on guitar-he used to play with the mighty Nashville pop band The Shazam!!!!!!