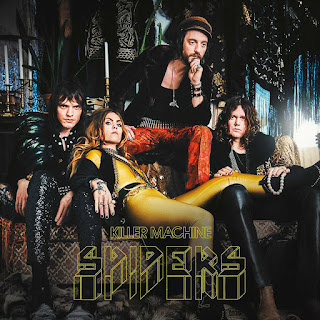 A little while ago, during an interview I did with Zack from Blues Pills he mentioned SPIDERS as being one of the major bands in Sweden. So I immediately checked these guys out on the internet and I was amazed to discovered this 4 piece from Gothenburg.

Their latest release, "Killer Machine", produced by Swedish legend Chips Kiesby, is filled to the rafters with catchy tunes and heavy riffs. Here is the interview of London born guitar player John Hoyles.

1) For the viewers of this blog who would not know you, What would you  tell about SPIDERS to introduce yourselves? How long are you guys  together as a band? Who is playing what instrument in the band  nowadays?

John: We are a Swedish rock band based in Gothenburg and have been  around almost ten years. The group consists of Ann-Sofie Hoyles on  vocals, John Hoyles on guitar, Rickard Hellgren guitar, Olle Griphammar bass and  Ricard Harryson on drums. We have released three albums over the years  and done a bunch of tours  in Europe and the States. 2) About the latest full length record "Killer Machine", what can you tell  about the recording process? Was this a "live" in the studio recording or  a track by track recording with lots of overdubs?

We recorded the album in Gothenburg at the studio Music A Matic with  Chips Kiesby as producer. Hes a bit of a legend here in sweden and has  produced loads of bands like The Hellacopters and Graveyard so it was  really interesting and educational working with him. He had a lot of good  references when it came to guitar and drum sounds and understood what  we wanted to achieve. On Killer Machine we worked track by track and took  our time with overdubs on each song. On our previous albums we have  recorded live using analog tape machines with just a few overdubs so it was  cool trying something new.

3) Do you use the nowadays digital recording technology or do you guys  only work with analog machines in analog studios?

Both, our latest album was recorded digital but our other albums were  analog. I think computers are so good nowadays that one cant hear the  difference anymore but I prefer recording analog because you don't look at  a computer screen all the time and just uses ones ears.

4) Is there a main composer in the band or is everybody involved in one  way or another?

Previously I used to write most of the songs but now it's more of a joint  effort. Someone in the band comes up with a riff or idea for a song and then we jam on it in the rehearsal room until we find a structure for a song. We  usually record a pre production of the song so we can work out details and  stuff before going into the studio.

5) What is your favorite topic/topic that comes easily when you write a new  song? 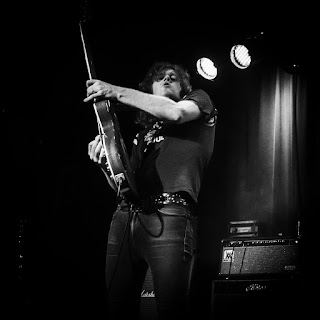 I don't know. I like songs to be simple and I suppose most of our songs are  about love, being mistreated, doom and gloom and a little bit of politics. I  find it difficult to write lyrics so they don't sound stupid or pretentious.

6) To what kind of music did you listen to as teenagers? What were your  favorite bands as a teenager? Name 3 bands that you consider still  have an influence on your own work today.

I grew up listening to my parents records. A Lot of The Rolling Stones and  Bob Dylan. When I was 11 I was looking through an old photo album of my mum's and found some photos she had taken of the band Cream back in 1967 when they played in her hometown. They really blew me away, Eric Clapton's early stuff influenced me a lot.  When I became a teenager I started listening to Black Sabbath , Led Zeppelin and going to record fairs buying obscure records with 70's bands like Bang, Dust and Sir Lord Baltimore. Three bands that have  influenced us as a band could be Black Sabbath, Heart and The Runaways.

Yes, we did a video for Dead Or Alive, you can find it on youtube.  We also have some other videos from our previous albums.

8) What can concert goers expect at a SPIDERS gig? Are you playing any  famous cover songs during the gig?

Our singer Ann-Sofie is a mix of Iggy pop and Mick Jagger on stage so its  always a good show to watch. We also have one of the best drummers around  and lots of guitar riffs and solos. So if your into hard rock I don't think you'll be  disappointed.

9) Are there any bands in Sweden today you consider yourself close to  musically speaking?

I think we are usually associated with bands like Graveyard, Blues Pills and Horisont. We have done a lot of tours together and are good friends. There is a big rock scene in Sweden with lots of good  bands like Lucifer, Dead Lord and Hot Breath to name a few.

10) How would You describe the music you're playing? Is this "vintage  rock'n'roll" or do you consider there is way more than that?

That's a difficult question. I used to play in a band called Witchcraft that was quite heavy 70's rock sounding back around 2004. People at the time called our music doom rock and then we went to the US people called us hipster metal and then a few years after that  we were called retro rock. And now all the bands that played similar music was categorized as retro rock including us. I prefer just saying we play classic rock.

11) What are the plans for the rest of 2020 as far as SPIDERS is concerned?  When can we expect a new SPIDERS full-length?

We had a few tours booked in Germany and Spain that have been postponed to 2021 and we had some festival gigs that were cancelled. It's been tough for everybody this year and I hope the music venues are going to survive. There's going to be a lot of bands touring when this Corona situation passes. We have been recording demos of some new songs and I hope we have enough songs soon to record an album. 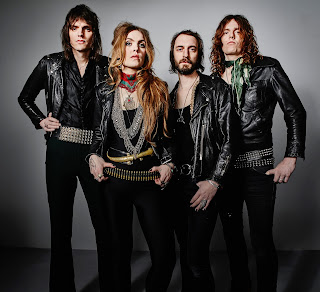 12) A special question for you John: You were born in London, UK and Moved  to Sweden in your teens. Do you believe that the kind of music SPIDERS is  playing could much easier come to life in Sweden rather that in the UK where everything is either indie rock or dance music?

Probably. I lived in a town called Örebro in the middle of Sweden and was fortunate to meet a lot of musicians that liked the same music. There was a a lot of tape trading among friends and an obsession of finding albums of old 70's bands that sounded like Black Sabbath. The US group Pentagram was really big in Örebro before many people had heard of them. There were many bands from Örebro that were inspired by 60's and 70's rock like Witchcraft, Norrsken, The Strollers,Dead Man, Great Mammoth, Troubled Horse, and Asteroid.  Music and style comes round in circles and I was lucky enough to be in the right place at the right time.