DATURA4 - Blessed Is The Boogie 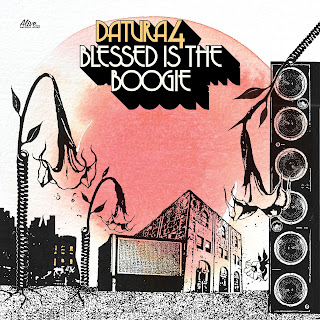 Today, Alive Natural Sound Records is releasing the aptly titled “Blessed is the Boogie”, the much anticipated third album by Datura4, a four piece fronted by Dom Mariani. The man is no new comer on the rock'n'roll scene and has had many musical lives. First in the 1980's with legendary garage rock combo The Stems  and later with revered power pop outfit DM3.

The addition of a keyboard player in Datura4 happens to be a very smart move since it has broadened the sound of the band and also added a very soulful groovy feeling on tracks like "Ooh Poo Pah Doo" or "Evil People Pt2". In my opinion, this is the band's best stuff so far ant it is very highly recommended. Here is what Dom had to say about the band and the new record.

1)  For the viewers of this blog who would not know you, What would you tell about DATURA4 to introduce yourselves? How long are you guys together as a band?  Who is playing what instrument in the band?

Hi Eric, Dom here – nice to meet you! Datura4 are a West Australian band from the port city of Fremantle. The band has been active from 2011. The current line-up is myself Dom Mariani guitar/vocals, Warren (Waz) Hall drums, Stu Loasby bass and Bob Patient on keyboard who came in to replace guitarist Greg Hitchcock after the Hairy Mountain album.

2) About the new released full length record "Blessed Is The Boogie",  what can you tell about the recording process? Was this a "live" in the studio recording or a track by track recording with lots of overdubs?

We always prefer to track live. This would be myself, Waz and Stu laying down the beds for each song. Some bass and guitar might be replaced, but wherever possible we would keep the original beds. Keyboards, vocals, additional guitars and percussion were added later. We prefer to do it live to get the performance and intensity.

We are into the analogue sound, so we favor that approach. However, we appreciate that digital recording has come along way and that the analogue sound can be replicated. We use it where we feel it is beneficial. It comes in handy. 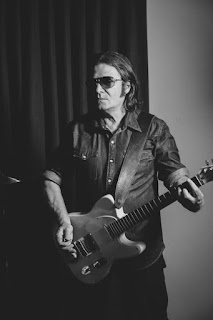 Apart from a couple of tunes on Demon Blues and Hairy Mountain the bulk of the song writing is done by me, and on Blessed is the Boogie the songs are mine. The process is fairly straight forward, I will bring a song and or a couple of ideas to our rehearsal and we will jam on them for however long it takes to get the groove and arrangement. The others add their bits and suggestions to get to the final result. It works well.

These days it’s fairly socio-political. I guess I’m interested, concerned with where the world is heading. Songs like Something to Hide, Fools Goldrush, Out with Tide, Trolls, Uphill Climb from the previous albums and Run with Lucy make references. Then it might be something like Blessed is the Boogie and Sounds of Gold which are about the joy life in music. I am very conscious of repeating myself, I try not to. Make every song fresh.

6) DATURA4 is sometimes described as a "psychedelic boogie" band. Do you agree with this description? Are you proud of it or do you consider there is way more than that?

I’m not too concerned with what description they have for Datura4. Sure, we dig psychedelic music, boogie, blues and heavy sounds, but we also dig lots of other music that are an influence in some way. I think the new album shows there are more to the layers that make our sound what it is. We want to try to keep things interesting, each song different.

7)  Do you have a new video on youtube  featuring a track from the new LP?

Yes, we do. We’ve just completed a video for ‘ Black Dog Keeps Running’.

8) What can concert goers expect at a DATURA4 gig? Are you playing any famous cover songs?

Our set will often comprise of songs from all the three albums, and we do play a few favorite covers. Train Kept-a-Rollin, Oh Well, Sinister Purpose are a few that we play from time to time. 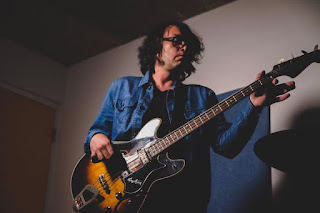 9) Are there any bands in Australia today you consider yourself close to?

Not really – we do have a few we like, but they are different. The Floors and The Red Engine Caves who are from our hometown are good bands.

It’s hard not to list a dozen bands, but for me personally – it’s The Beatles, Creedence Clearwater Revival and The Jimi Hendrix Experience. Led Zeppelin, Cream, Black Sabbath, T Rex and ZZ Top came in somewhere around the age of 16. 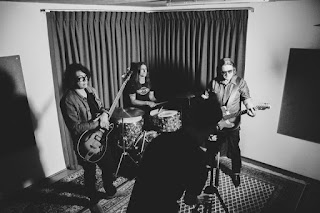 We hope to be touring Europe in the later half of the year, and hopefully get started on album number 4.

We hope everyone will enjoy Blessed is the Boogie.

The album is available in an amazing HAND MIXED STARBURST VINYL limited to 200 copies. So you'd better hurry if you want to purchase one of these goodies.

Or you can buy the CD with 2 bonus tracks.

Special Thanks to Patrick Boissel

I was able to find good information from your articles.