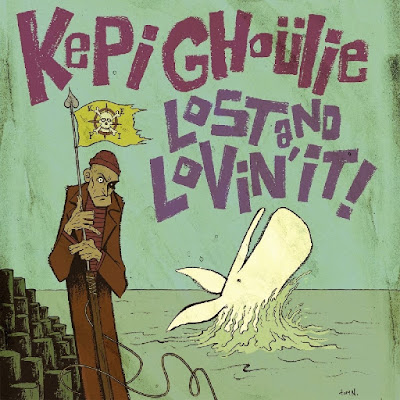 The man is best known for his years fronting the pop-punk outfit The Groovie Ghoulies and his solo albums have rambled from acoustic tunes to songs for kids to jangling folk-rock to uptempo poppy punk.

His new solo record is mixing all those various styles together, the new tunes being delivered in Kepi's unmissable style and filled with the open-hearted attitude that makes him such a beloved figure to his fans. As in the glory days of The Groovie Ghoulies this new record in laden with hooky sing along songs soon to be classics in their own right.

Though it touches on many sounds and styles, Lost and Lovin' It! holds together well thanks to the warm heart beating away at the center. This is definitely Kepi's best solo album so far, showing that the man is more than ever on top of his game. It doesn't matter if you've been a Ghoulies fans since the late '80s or have never heard of him before; if you like sweet, catchy songs sung by a real live human being with a heart as big as an ocean, Lost and Lovin' It! is right down your alley!

The glammy rendition of "Inkpot", where Kepi is backed by the always amazing PRIMA DONNA, is worth alone the price of admission.

So this blog seized the opportunity to have a little chat with Kepi.

1) Kepi you are certainly no newcomer to the Rock'n'roll scene. We would like you to tell the viewers of this blog your full story. The early days in The Groovie Ghoulies, The Haints episode and stepping into the light as a solo artist.We want to hear it all from you!
That could fill a book! I will be happy to answer any single question that you may have! Thanks! :)

2) You are born Jeffrey Willson Alexander. So How did you get your nickname "Kepi"?
That is not quite my birth name but everybody calls me kepi now anyway! I am not sure of the origin now it has been so long! :)

3) About the new record "Lost & Lovin' It", can you explain the choice of the title and how came the idea of the artwork and the map included? Is the artwork and the map the work of the same artist?
The title "Lost and Lovin' It" just sort of came to me... isn't it kind of like celebrating the path that you are on at any given time! Doing your best! There are a lot of nautical themed songs so the art work (and map) (finding your way) seemed appropriate! All the art was done by the AMAZING TOM NEELY! 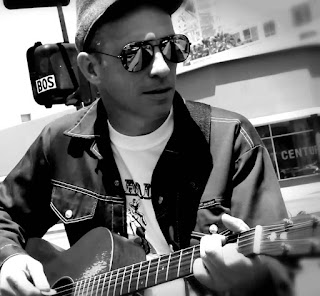 5) As a songwriter, what are your favorite topics to write about? It seems to me there a very positive vibe coming out of this new record. In a certain way this positive vibe reminds me the work of Jonathan Richman. Are you familiar with this artist and do you agree with this comparison?
Thank you! That is a great complement! Perhaps the best! Jonathan Richman is unique and original, positive and endearing... I feel it is my job to contribute a bit of positivity to this crazy world! I love playing by my own, or no, rules! I wish to be an ARTIST! :) Thank you!

6) Do you have a video on youtube featuring a track from the latest LP?
There are two videos on Youtube: "The Anchor Song" and "Lost and Lovin' It!" Thank you! Enjoy! More to come :)

7) What can concert goers expect at a Kepi Ghoulie these days? Will it be you alone with an acoustic guitar or with a full band? Are you playing any famous cover songs like Shocking Blue "Inkpot" ?
Every show is different! Solo! Band! Backing tracks! I haven't played INKPOT live yet but plan on playing it live in October in San Francisco backed by Prima Donna! They are also the ones who back me on it on the record!!!

8) Is the new record still the work of a solo artist or was it recorded "live" in the studio with a full band? Can you tell us on Which song the guys of PRIMA DONNA are playing?
the record was recorded solo, with a band, and also guest tracks sent in from Berlin, Florida, and more! I love this record!! Prima Donna IS the band on INKPOT!!!

10) Anything you would like to say to the viewers of this blog?
thanks to your readers! Please check out this record! It was a year in the making labor of love! I think it worked because apparently it is the most streamed recording that I have ever made! Thank you!!!