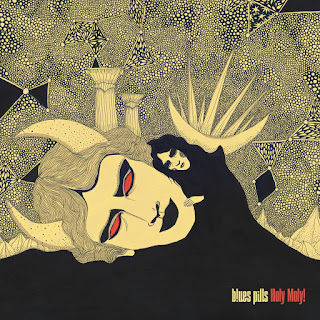 
So it was time for this blog to talk to guitar player and founding member Zack Anderson.

1) For the viewers of this blog who would not know you, What would you tell about Blues Pills to introduce yourselves? How long are you guys together as a band?  There have been various changes in the band over the years. Who is playing what instrument in the band nowadays?

We are a rock band with blues/soul/psychedelic influences.  Elin and myself formed the band in 2011, and there’s been various line up changes over the years.   Currently our lineup is: Elin Larsson - Vocals; Zack Anderson - Guitar; Andre Kvarnström - Drums; Kristoffer Schander - Bass

2) About the latest full length record "Holy Moly!", what can you tell about the recording process? Was this a "live" in the studio recording or a track by track recording with lots of overdubs? 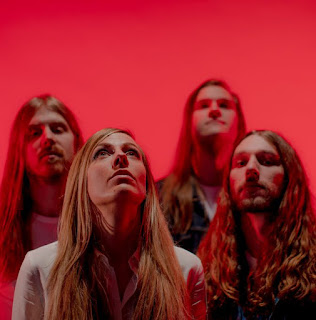 The recording process was somewhere in between.  It was important for us to get a live feeling, but since this was before Kristoffer joined the band it was just Me, Elin and Andre in the studio, so totally live wasn’t really possible. The three of us played together to track the drums and get as much live feeling as possible.  Then I would go back and add a bass, and more guitars.  And finally vocals.  The downside to recording this way is sometimes you don't know if you got it right until your at the end of adding everything, so some songs we would be done, then trash it all and start over up to 4-5 times.  Not because we felt it wasn't "perfect" technically, because we don't care so much about that, but if the feeling wasn't right or the emotion wasn't coming across right.


3) Do you use the nowadays digital recording technology or do you guys only work with analog machines in analog studios?

The first two albums we recorded and mixed totally analog.  The newest album  Holy Moly! was a hybrid because it was all analog on the front end during tracking, but then everything was put to the computer and the files sent to Andrew Scheps for mixing. There is a lot of analog and vintage equipment which I love and wouldn't want to record without, but for me the question about analog vs digital is more about workflow than the sound for me.   My main concern is getting the source right.  I used to be firmly in the analog camp because my first experiences with digital were not that great, but nowadays there is some really good sounding converters, and my opinion is it's a lot more important the choice of guitar, amp, microphone, high quality preamp, etc.  If you get all that right, and use nice converters, its going to sound great, and I would choose a high end digital setup vs, a shitty tape machine any day.  Don't get me wrong though, I still love to record on tape.  It can be a lot more fun and exciting to see the tape machine running vs, looking at a computer screen, and it forces you to make decisions in a different way which I like.  At the end of the day it's all just tools and great sounding albums have been made on both. 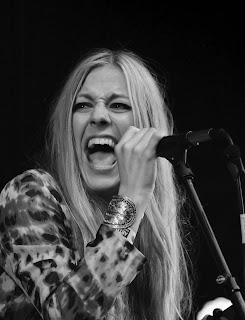 Elin and I formed the band, and have always been the main songwriters.  That said the others are definitely involved as well.  Usually it starts with me or Elin, having a general idea or some kind of outline for a song, then we show it to the others and finish as a group.  In some cases, like with the song Proud Woman, it was actually born from a jam.  We just started to play and stumbled upon it, it kind of just happened, so every song is different.

For me, I definitely get more inspired to write lyrics by negative emotions like sadness, anger, heartbreak, things like that.  I don't know, I am not a depressed person, but it just feels a lot easier for me to write songs when it gets triggered by those things.


6) To what kind of music did you listen to as teenagers and does it still influence your today work? What were your favorite bands as a teenager? Name 3 bands that you consider still have a influence on your own work today.

In my early teens I was interested in music I was sort of searching and listening to different styles of music to see what I liked.  The thing that changed it was when I was 14 I first heard Seven Nation Army by the White Stripes.  I had just started to play guitar and I learned that song, and pretty much from that moment I got hooked and wanted to be in a band.  At that point my music tastes started to shift towards more "vintage" styled music.  Soon I bought a Jimi Hendrix greatest hits CD, and I listened to that constantly.  By the time I was 17 I discovered Peter Green's Fleetwood Mac, and from there I just continued down this path of discovering more and more music from that era.  Even though it's old music, as a teenager in the early 2000's it felt like something totally new and fresh to me, because it was so different from what you heard on the radio.

Right now there is three, Proud Woman, Low Road, and Rhythm in the Blood..  We also have plans to make at least one more.

8) What can concert goers expect at a Blues Pills? Are you playing any famous cover songs during the gig?

The set is basically 98% our original songs, but we have sometimes done covers.  Some of them were more obscure unknown songs.  Although we did a cover of "Somebody to Love" by Jefferson Airplane...  The festival goers always liked it. 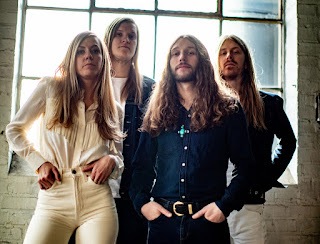 9) Are there any bands in Sweden today you consider yourself close to musically speaking?

There is quite a lot of bands playing music inspired by vintage rock, etc. in Sweden, so the list could go on forever.  But some of the more well known ones are Graveyard, Witchcraft, Spiders, Horisont, Troubled Horse...

10) How would You describe the music you're playing? Is this strictly blues, like the name of the band might suggest or do you consider there is way more than that?

I think when some people think of the blues they think of more pure blues like BB King or something... and we are far away from that.  In comparison it's almost like hard rock, but for sure there's always this undertone of blues in our music.  When the band was formed we were so inspired by Peter Green and wanted to get a similar feeling into our music.  So our idea of blues when we named the band was more this progressive British blues, like Black Magic Woman, Green Manalishi, and Rattlesnake Shake type of songs.   I think of us more of a rock band in general as a base, but then pulling in other influences and adding them, like soul, psychedelic, blues, country... etc.

11) What are the plans for the rest of 2020 as far as Blues Pills is concerned?
We are just rehearsing and waiting to be able to tour and play live again.  It's about all we can do now in these corona times unfortunately.