The Poison Boys - "Out of My Head" 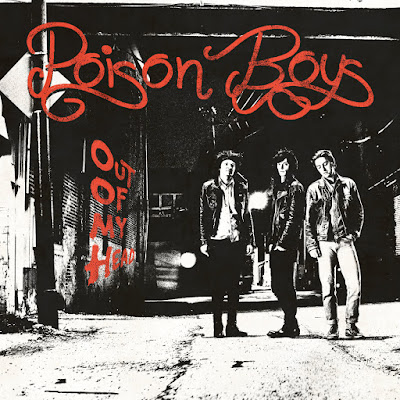 1) For the viewers of this blog who would not know you, What would you tell about you and your musical background to introduce yourself? Can you also introduce the other members of The Poison Boys who participated in the recordings?

Hi I'm Matt Dudzik from the Poison Boys. My musical background consists of a whole lot of rock n roll, blues and a whole lot of punk. I grew up listening to punk starting with the Ramones, Sex Pistols and the Misfits in my early teenage years before getting into street punk and protopunk/older 50's 60's and 70's rock n roll. The sleazier the better. Used to play drums in a few punk bands through those years that never really did much, and eventually decided I wanted to play guitar in a rock n roll punk band kinda like The Riffs. So, I taught myself guitar at about 19 years old and began Poison Boys when I was about 23.

The other members of the band on the "Out of My Head" LP are Matt Chaney - drums, and Adam Sheets - bass. Our drummer Matt Chaney has been playing in garage punk / rock n roll type bands for years. He used to play in a band from Ohio called Wheels on Fire that had released a few full lengths and gotten several tours under their belt before disbanding a few years back. Then he played in a band called City Slang that released a 7" on No Front Teeth Records back in 2016.

The bassist on the LP is Adam Sheets, who was in the band from 2015-2018. He used to play in a Chicago-based punk rock n roll band called Scoundrel in the early part of the 2010's that released one LP. He's also the bassist on our three 7" releases but left the band last year due to changing interests and different life directions. 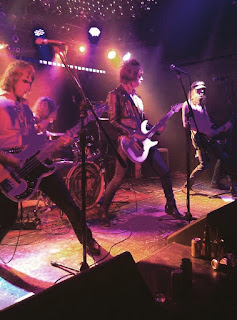 2) About the "Out of my head"  full length album, what can you tell about the recording process? Was this a "live" in the studio recording or a track by track recording with lots of overdubs?

The recording process was quick and easy. We had it done digitally, just had our friend CJ Rayson (aka Ceejay R'Moan) track the LP at our rehearsal space on the west side of Chicago. We did most of it track by track, starting with drums for each song then bass and guitars. I played a scratch guitar track along with Chaney when he was recording his drum tracks.

The songs that I played drums on - "Out of My Head," "Slow Down," "Cut Right Out,""Tear Me Apart," and"I Won't Look Back" (Dead Boys cover) - I had CJ record me playing the drums without a click track or someone playing along with me or music in the headphones. That was fun but I had to redo a few of them from listening back and realizing I played them too fast at first.

We didn't really have to do a ton of overdubbing, pretty much nailed a ton of it first take. Most of these songs had been in our set for years so they were pretty natural when it came time to record.

Adam and Matt recorded guitar and drums for "Downtown" as a live take first try and I got to just watch. It was pretty cool not having to record anything other than vocals for that one. Maybe one day we'll do a whole album like that... 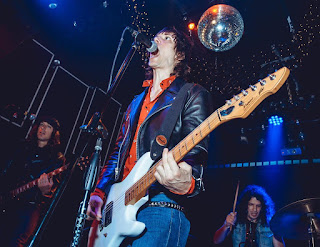 Both methods are cool and have their advantages and disadvantages. Unfortunately I haven't had the opportunity to record with analog machines yet.

4) How would you describe the music you are playing? If I were to call it Rock'n'Roll à la New York Dolls, would you agree with this label? Are you proud of it or do you consider there is way more than that?

I would definitely agree with that. The Dolls are one of our main influences. Not all of our songs are in the same vein as their songs though. We mix it up a bit to have a rounded spectrum of rock n roll style in our music. "Up to the Sky" is definitely more on the Stones/Dolls side of things whereas "Out of My Head" is more on the Stooges "Raw Power" and high energy punk side of things. It just depends on what comes out when writing the songs but also not going too far outside of what we play. This album is a pretty good demonstration of the range of rock n roll style we have for the Poison Boys, and in that way it was a good first album, a good demonstration of what we can do. The next album we plan to have a bit more on the punk side of our songwriting, and the one after that maybe more on the protopunk or glam side. Stooges/Mott/Lou Reed type of glam though, not much like the Sweet or bubblegum style. Hopefully this makes sense. 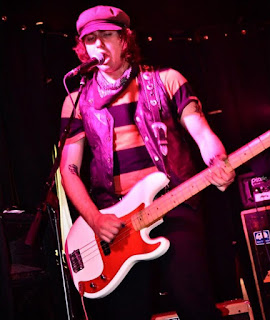 Just life experiences. From living in a gloomy filthy sketchy city to various interpersonal relations. Getting excited over meeting someone new or reveling in the scuzzyness of the city. For some reason I usually get inspired to write when I'm feeling down about something.

Yeah we have two videos out right now of songs from the Out of My Head LP.

"Tear Me Apart" is about someone you really can't stand and gotta get away from. You tried to fix things with them but it just won't work out, so fuck 'em.

"Been Here All Night" is about meeting someone you really fall for. I've always considered this one "single" material for the album. I wrote lyrics to some riffs that my friend Mike Lippman wrote a few years back when we started the band. Sadly, he passed away the same year we started the Poison Boys. I wanted to keep his memory alive by continuing to play the songs we wrote together so it's nice to get this song out and have a music video for it. 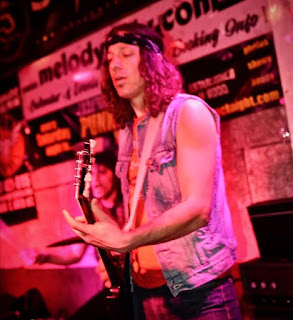 7) What can concert goers expect at a The Poison Boys gig? Are you playin' any famous cover songs during the concert?

They can expect the best rock n roll music they've ever heard loud and in their face!! We play high energy songs and play one song after the next with minimal pauses like the Ramones did. Come to our show and find out for yourself!!

We cover a classic rock n roll song called "Slow Down" that we play that's originally by a pianist and singer from the golden era of rock n roll (the late 1950's) named Larry Williams. That song's also been covered by bands like The Jam and the Beatles. Other songs Larry Williams wrote are "Dizzy Miss Lizzy," "Bony Maronie," and "Bad Boy." Amazing Little Richard sounding stuff.

We love doing songs from that era or the 1960's like when we did a cover of "Fluctuation" by Texas one-hit-wonders the Shades of Night on our "Bad Mouth" 7" back in 2017. Most of the time though we just play our own songs live but it's really fun to throw in a cover every here and there and play it Poison Boys style. There's also another cover on our LP of the Dead Boys' "I Won't Look Back." I chose that song because it describes my childhood and goes well with our style. We don't usually play it live though. There's too many of our own songs to pack in our set to focus much on covers.

Not really. There's a bunch of variations on punk rock n roll but not a lot that mix it up within the genre like we do. There's definitely a ton of sick rock n roll bands out right now though like Jonesy, The Crazy Squeeze, Joey Pinter, the Sweet Things, Black Mambas, the Rubs, the Waldos, the Flytraps, and our buddies Criminal Kids and Big Blood from our area to name a few.

9) To what kind of music did you listen to as a teenager? What were your favorite bands as a teenager? Name 3 bands that you consider still have an influence on your own work today in The Poison Boys.

Johnny Thunders, Generation X, Slaughter and the Dogs, The Professionals, Nervous Eaters, Berlin Brats, Iggy Pop, the Jook, Lou Reed, Alice Cooper, MC5, Flamin Groovies and the list goes on and on. Definitely the Riffs for doing rock n roll punk at a time when it seemed to be either pop punk or street punk that was popular like 20 years ago. 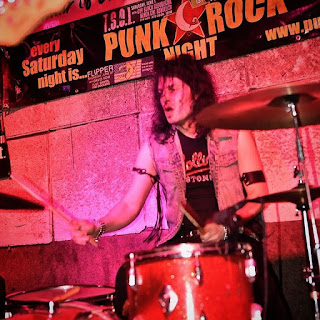 We got big plans in 2020 for another few records. We have a 7" in the can that we recorded on tour over the summer, just looking for label support at the moment. And we started tracking for our 2nd LP already, set for (hopefully) release next summer. Oh yeah and more touring of course!!!!!

Thanks for listening to and supporting the Poison Boys! Support your local rock n roll and punk scene any way you can. Be kind to each other and give love every way you can. It's not really cool to be a dick or a douche bag and exclude newcomers from the scene. We're all we have left in a world where rock and roll and punk seems to be slowing down and fading out! Lets keep this fire burning. See you at the gig.