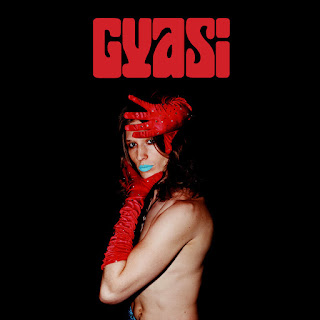 In the woods of West Virginia, in an isolated hollow, a young boy thought he was a peacock. When he realized, much to his dismay, that he was not a peacock, he picked up a guitar. "Androgyne" is the debut full length of Gyasi (pronounced "Jossy"), the new face of Glam Rock. And it's brilliant.

1) For the viewers of this blog who would not know you, What would you tell about you and your musical background to introduce yourself? Can you also introduce the other guys who participated in the recordings? Are they part of your "live" backing band?

Well, I’ve been playing music since I was 4. I grew up on a farm in a hollow in the mountains of rural West Virginia, an only child, with 265 acres of woodland with chickens, horses, pet peacocks and a whole world of imaginary characters I would create in my head. My parents taught me to live very close to the land, and also introduced me to the great world of music that came out of the 60's and 70's as well as the folk and blues music that sparked it. The family next door were immigrants from Russia, intellectuals who fled the suffocating Soviet existence and brought with them an incredible record collection and a wealth of knowledge and philosophy that shaped me in many ways as I grew up. There is a bit of a revolving cast of musicians with the group. None of the players on this record are actually part of my current touring band. Ammed Solomon and Gaelen Mitchell played most of the drums, and Dylan Whitlow played bass on one tune. Otherwise it’s mostly me on all the instruments. 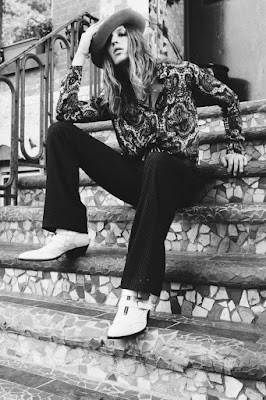 2) About your debut full length album "Androgyne",  what can you tell about the recording process? Was this a "live" in the studio recording or a track by track recording with lots of overdubs?

The bulk of the songs were recorded with just me and a drummer, either Ammed Solomon or Gaelen Mitchell, done very live, sometimes improvised for the base tracks. Then I would build parts on top of that initial guitar/drums foundation. On Bring Your Love I played all the instruments including the drums. Dylan Whitlow, an incredible musician in the band Blackfoot Gypsies, played bass on Young Love. That one is almost entirely live. The more live the better for me. As long as there is a strong performance captured initially, it’s easy to build on. With this record there was never very many overdubs. I think Wilde Childe has the most. The more you can hear the musicians interacting the better.

This record I did at my home studio on an 8 track tape machine. Most songs were initially recorded on tape and then finished in Logic on the computer. 8 tracks was usually not quite enough for me to finish out a song, but I would basically treat the computer like a tape machine without much editing or manipulation.

4) How would you describe the music you're playing? Do you call it "glam" or do you consider there is much more to it?

I suppose both. The presentation is certainly glam and the essence is glam, but there is definitely much more to it. My favorite glam artists (David Bowie, Marc Bolan, Lou Reed, Iggy Pop) all had a whole world within their music that went well beyond any simple classification. I suppose if there’s any term that fits all of it, it’s rock n roll. I am very influenced by so many kinds of music, but it sort of gets filtered through a glam rock presentation but there is much more there, and there will certainly be evolution to come as well with the next music I’m writing.

Hmm, I don’t know. It’s different every day. All depends on the mystery of the moment I suppose. All the subconscious things that I pick up on tend to come out in songs, and it can be hard to predict what it will be. I suppose in looking at my songs I tend to write about certain types of characters, often characters seeking enlightenment through self destruction or rebellion, but it varies a lot.

6)  Do you have a new video on youtube  featuring a track from the new LP??

Yes. Tongue Tied, Nightcrawl, and Blackstrap all have videos on youtube.


7) What can concert goers expect at a Gyasi gig? Are you playin' any famous cover songs during the gig?

My goal for the live show is spontaneity. We almost never play the same set and the songs always change night to night. It’s high energy rock n roll that’s designed for the escape in to the present. I think that’s what audiences are hungry for, and it’s what I’m hungry for. To share the moment together with the audience. We rarely do covers. Sometimes we’ll do Waiting for the Man by Lou Reed. We’ve done some old blues tunes and Moonage Daydream. When we play longer sets sometimes they’ll come out but in general we’ve been focusing on the original material. 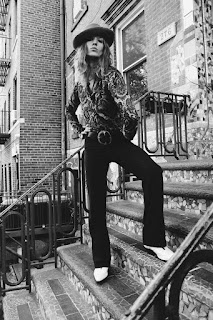 Mmm in the US, not a whole lot. There are certainly elements that we have in common with other bands, but as a whole thing there aren’t many that come to mind. I mean, I love Starcrawler, and I suppose we are similar to them in some ways but at the same time quite different. Also the Lemon Twigs are awesome. I like how much they are always changing their sound and presentation.

9) To what kind of music did you listen to as teenagers? What were your favorite bands as a teenager? Name 3 bands that you consider still have an influence on your own work today.

As a teenager, I was totally obsessed with every nuance of Led Zeppelin. I spent years learning every thing I could of their music. Also The White Stripes. The Rolling Stones were also huge for me at that time. At the same time, though, I was hugely into a lot of old blues music like Robert Johnson and Big Bill Broonzy, and also Django Reinhardt was someone I studied extensively. Hard to narrow it to 3.

I would say all those I mentioned still influence me but I would definitely add Bob Dylan, Lou Reed, and David Bowie to the list. My songwriting and lyrical influence came in my late teens and early 20's when I really got into those three artists.

Well I’m finishing the next record now, and we have some dates coming up in the next few months. Some small touring and some cool local shows. Most of our booking and plans are going toward the spring though, as December and January are very slow for the music business.

I believe that covered it. Thanks! Cheers,